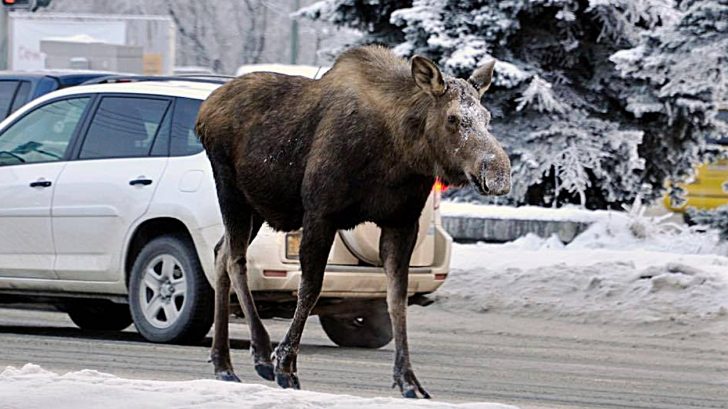 A lady in her 50s got trampled by a massive male moose the other day when she tried to shoo it off her property in Breckenridge, Colorado. Luckily, it didn’t kill her.

The Denver Post reported that it happened around 6pm on Saturday on March 28th, 2020. The moose was standing close to a car full of people who were trying to exit their vehicle but couldn’t do it due to how close the moose was to them.

According to Randy Hampton, a public information officer for the northwest region of Colorado Parks and Wildlife, he said the lady allegedly walked right up on the moose. As she was trying to shoo it away, it turned around and trampled her.

The unidentified woman was seriously injured and taken to the local hospital where she later told wildlife officials what happened. The officials tracked the moose down which wasn’t far from the lady’s property and they killed it in fear it would attack another human. The moose’s body was donated for its meat.

“Anytime we have a situation where an animal shows aggression and injures a person, the policy is that animal is put down,” Randy said told The Denver Post.  “When they become aggressive toward people, most of the research shows it is likely to happen again.”

Wildlife officials said that moose are often found venturing into towns and cities during the winter time. Officials continuously tell people to keep their distance and to never, ever, approach them because it’s dangerous to the human and the animal.

This incident is the perfect example of why you shouldn’t approach a wild moose because not only did the woman get seriously injured but the officials were forced to kill the moose due to protocol. Just recently a woman was in this same town and tried to approach a moose and it kicked at her. Everything was caught on film, and she was lucky to get away with her life. Take a look at that video below.

We can’t believe we even have to say this, but petting a moose is a very bad idea. ?‍♂️? Anna Stonehouse