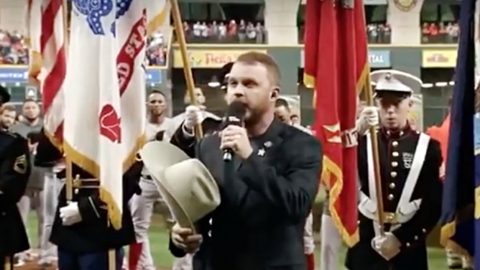 During game 3 of the 2018 American League Championship Series (ALCS) in Houston, fans got a phenomenal performance from their own Texas native. Country music singer, Cody Johnson showed up ready to give his local family a show!

Johnson is a Texas-born native whose passion for music started when he was a young boy. When he was twelve years old he really put his singing and guitar skills to the test. Johnson originally started his career in a band with his father Carl and drummer Nathan Reedy. The trio recorded their first album Black and White Label in 2006. Since then, Johnson has self-released five more albums, the latest being Gotta Be Me.

Well I guess not much has changed ha #TBT

Johnson had been touring around America, playing a series of shows at venues and bars. With an incredibly supportive fan base, the Texan is making quite the name for himself in country. Johnson just recently released his 2018 single “On My Way To You” dropping the music video not far behind. The sweet tune tells the story of how every heartbreak and trial is worth the pain once you finally meet who you’re meant to be with.

“It was all worth the while, when I finally saw your smile. Every highway, every heartbreak, every mountain, every mile.”

In cowboy boots and a sports jacket, the singer stepped onto the field for the anthem. Removing his cowboy hat before performing, Johnson presented his deep vocals for the stadium. Singing such an honorable song can be nerve-wrecking but Johnson put any doubts to rest. He hit every low note and every high pitch, completely knocking this performance out of the ballpark!

It was an absolute honor to sing the National Anthem for Game 3 of playoffs for the @astrosbaseball today. Play ball! #ALCS

Be amazed by Cody Johson’s talent in the video below!