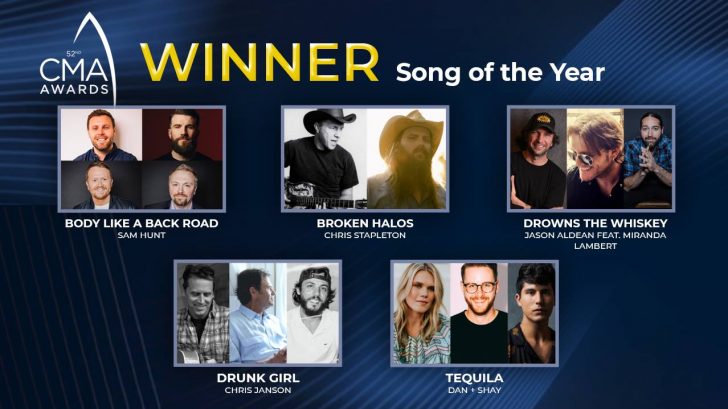 A sweeping win of the CMA Awards might be in store this year for one of the winners of the annual Song of the Year award – but all five nominees have taken their songs to the top in a way that nobody could ever imagine.

Songs that broke records like Sam Hunt’s “Body Like a Backroad” and even newer tunes like Jason Aldean’s duet with Miranda Lambert have earned nominations for this coveted award, but who will take the trophy home might be anyone’s guess!

Who Should Win Song of the Year at the 2018 CMA Awards? My answer: "Drowns the Whiskey," Jason Aldean feat. Miranda Lambert (Brandon Kinney, Jeff Middleton and Josh Thompson) What do you think? https://t.co/957qUyx5sa

The 2018 CMA Awards ceremony is sure to be filled with surprises, upsets, and a wild amount of fun. One of the first awards announced during this evening’s show will be the Song of the Year – which is different than the award for Single of the Year.

Here are the nominees for 2018 CMA Song of the Year:

Congratulations @SamHuntMusic on Body Like a Back Road being nominated for Song of the Year at the 2018 CMA's!

Two years in a row.
2nd time's a charm.? pic.twitter.com/CYvpNMPxYG

While everyone nominated is an incredibly talented musician, only one song can take home the trophy!

The winner for the 2018 CMA Award for Song of the Year is: “Broken Halos” by Mike Henderson and Chris Stapleton!

Congratulations to both of these talented guys for their dedication, hard work, and unforgettable music! Watch Stapleton and his wife Morgane performing “Broken Halos” during last year’s CMA Awards below and let us know what you think of the win!