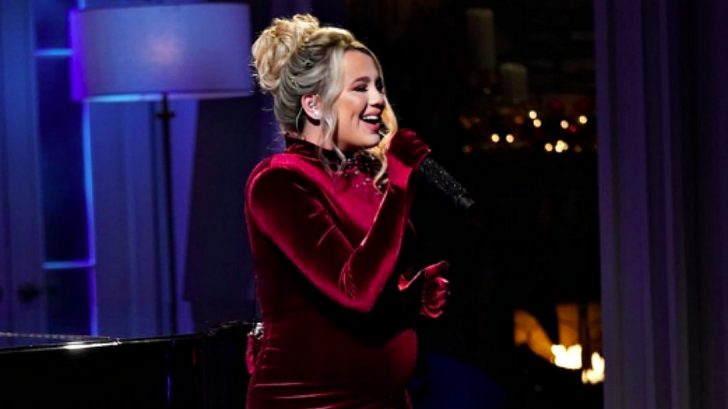 CMA’s Country Christmas television special aired Monday night (November 30) and it was jam-packed with festive holiday performances from some of country music’s biggest artists. One of our personal favorite performances came from country newcomer and American Idol album Gabby Barrett.

Barrett, who is expecting her first child with husband Cade Foehner, looked stunning in a tight red velvet dress as she sang “The First Noel,” a song she says is her favorite Christmas tune.

“I’ve listened to it since I was little, so it’s awesome to be able to comer here and perform it for everybody,” Gabby said ahead of her performance.

Barrett released her rendition of “The First Noel” in October, but Monday’s CMA Country Christmas appearance wasn’t the first time she performed it on stage. Barrett also sang it at the National Christmas Tree lighting in 2018.

“Christmas is one of my absolute favorite days of the year, and my faith is the cornerstone of my life, so being able to share both with ‘The First Noel’ is a gift,” Gabby said. “I feel so blessed to do what I do every day, and I hope that this song adds something special to your holidays.”

Gabby Barrett placed third during Season 16 of American Idol in 2018. Barrett met her now-husband, Cade Foehner, who was also a contestant on Idol. They got engaged in March of 2019 at the same hotel where they met while filming Idol, and wed shortly thereafter.

Watch Gabby Barrett sing “The First Noel” on CMA Country Christmas in the video below.