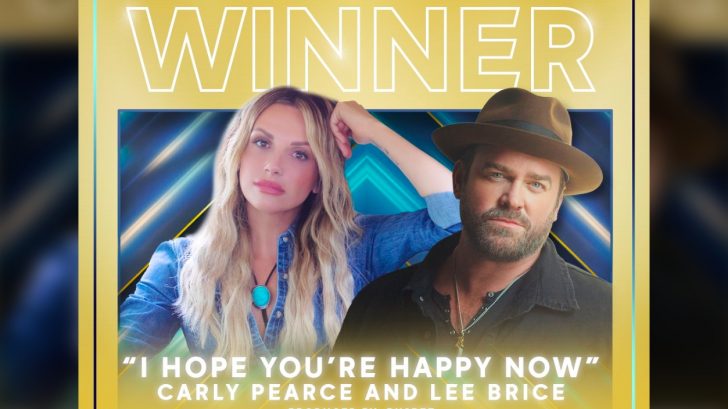 Every year, two CMA Awards are handed out several hours before the actual show, which is broadcasted on ABC on Wednesday night (Nov. 11). This year was no different, and both Musical Event of the Year and Music Video of the Year were announced on Good Morning America Wednesday morning.

The nominees for Musical Event of the Year are as follows:

It was announced that Carly Pearce and Lee Brice had won the award!

Congrats to @CarlyPearce and @LeeBrice on winning the #CMAawards Musical Event of the Year for "I Hope You're Happy Now"! ? Watch the #CMAawards TONIGHT at 8|7c on @ABCNetwork to see who else takes home the trophies. pic.twitter.com/OaBoQrzz90

This is Carly’s very first CMA Award, so after she found out, she was extremely emotional. She was in the middle of doing radio interviews and broke down in tears. This win is likely extra meaningful because it was the last song she and her producer busbee, who passed away last year, worked on together.

Carly will be performing the song at the CMA Awards on Wednesday night (Nov. 11) with Lady A’s Charles Kelley, who is stepping in for Lee because he was diagnosed with COVID-19.

.@leebrice & I WON MUSICAL EVENT OF THE YEAR. This was the moment I found out as I sobbed on the phone in my PJs. In a year that started as the hardest I’ve ever experienced, YALL are helping me see the big, bright, BEAUTIFUL light at the end of the tunnel. ? #cmaawards pic.twitter.com/RrF9Yzz0Sr