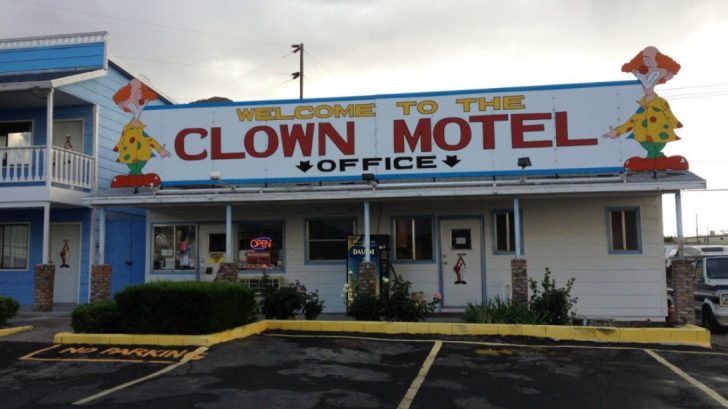 There’s just something about clowns that instantly sends us into a state of fear. While most of us can’t pinpoint exactly why clowns are creepy, a UK publication claims that they’ve figured it out. “Human faces that deviate from the norm are upsetting,” the Guardian states.

Makes sense to us. And, believe it or not, fear of clowns is a very real phobia. In fact, there’s even a name for it: Coulrophobia. If you’re one of the millions of coulrophobia sufferers, perhaps you’d better think twice before staying the night in the Clown Motel, in Tonopah, Nevada. The clown-themed motel is considered the scariest motel in America.

The lobby is covered with clowns, including a creepy life-sized clown sitting in a chair, holding smaller clowns in its lap. And, every single room is clown-themed. There are clowns on the doors and portraits of famous clowns hanging on the walls.

To make things even worse, the Clown Motel was built next to a cemetery where many of the once-booming-ghost-town’s residents are now buried. At it’s peak, Tonopah was home to more than 50,000 residents thanks to the second-largest silver discovery in Nevada’s history. The town now boasts roughly 2,500 residents, meaning that many moved on and many are buried next to the Clown Motel.

Many people have stayed at the Clown Motel since it was built in 1985, but few believe the place is haunted. Online reviews reveal that most motel guests are simply intrigued with the historical significance of the town and the motel, although they admit that it’s creepy sleeping next to a graveyard.

Get a closer look at the Clown Motel in the video below.