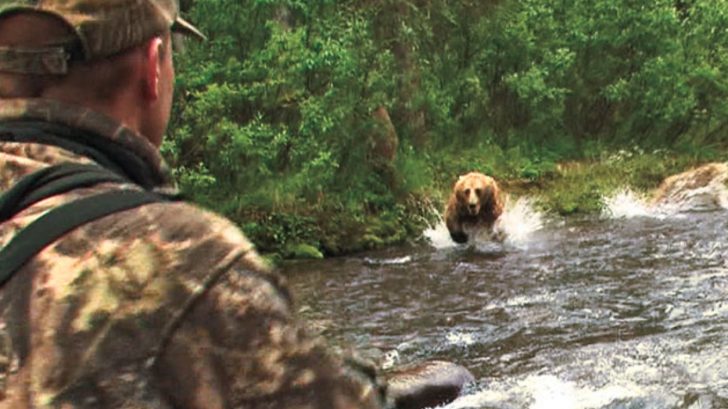 Hunter and fisherman Fred Eichler has an incredible story along with a video showing the epic moment he and three other men were charged at by a massive brown bear.

“The sow charged us with amazing speed, her ears laid back and mouth wide open. We all froze in fear,” Fred wrote on Pertersen Hunting.

Fred understands that the Alaskan brown bear was just doing her job, trying to protect her cubs from what she thought was a danger to them. Even so, the experience was quite harrowing for the men floating down a small river.

“We had just rounded a bend in the shallows when we spotted the large brown with her cubs. The sow bolted for cover, but the cubs remained on the bank (my guess is they had never seen her run from anything),” Fred wrote on Pertersen Hunting.

Unfortunately for the guys, the river current was pushing their raft closer to the bear cubs and after getting too close for comfort, the mother bear busted out of the bush into the water and was full-on charging at the men.

Fred’s tour guide, fortunately, had a .500 Smith & Wesson and had already pulled it out and quickly fired a shot in front of the raging mother who was only about eight to ten feet away from the raft.

“The muzzle blast combined with the massive spray of river water caused her to turn at the last second, saving us from a mauling…or worse,” Fred said.

The whole ordeal that came out of nowhere was over in seconds. The mother bear was spooked by the shot and ran off back into the bush and her cubs followed.

“Once you look at the footage, I think you will agree it qualifies as a close call. I’ve had my share of treacherous moments afield, and hopefully learning from these experiences will help keep you safe the next time you’re chasing dangerous game,” Fred wrote on Pertersen Hunting.

Watch Footage From The Close Call With The Bear Below