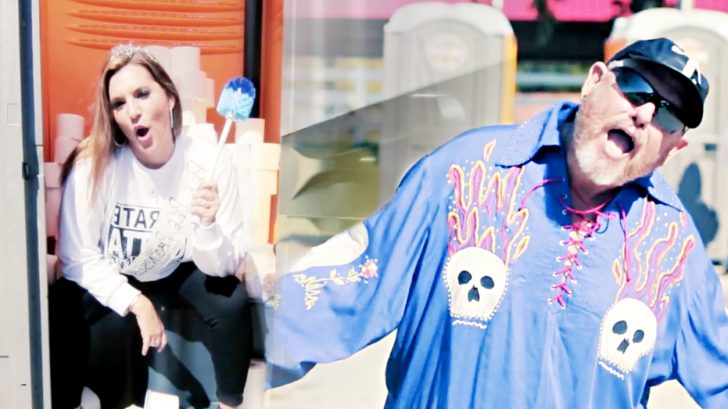 The “Weird Al” Yankovic of country music is back at it – and this time he has recruited the help of his entire family to make his musical parody the best one yet.

The video opens with Cledus T. Judd coming into the living room to tell his kids that they are going to be performing for a fundraiser that will help firefighters get a real hose. His kids reluctantly agree but not without making fun of his choice of clothes. One kid even tells him that the shirt he once rocked at the Academy of Country Music Awards makes him look like “A WalMart Porter Wagoner.”

Right as he tells everyone to get ready, his wife pops up and tells him, “Hold on, I gotta pee.” With that, his hysterical parody takes off – the whole theme revolving around his wife’s small bladder making them late to everything.

Judd set his parody to the tune of Florida Georgia Line‘s hit song, “Meant to Be.” Originally featuring Bebe Rexha, the song talks about a couple learning to let go of the desire to control everything. Judd took a very different approach replacing “meant to be” with the lyrics, “she’s gotta pee.”

Throughout the video, he and his wife make fun of the struggle most couples deal with on a daily basis – the inevitable bathroom stops on the way to work, events, or even just taking the kids to school. He takes the unfortunate problem of being late to things and turns it into a hilarious series of events in his music video.

The family continues to deal with the issue through a sequence of events and they even have a “pee stop” counter. Luckily it is all in good fun and the family seemed to have a great time creating the video. They couldn’t even contain their own laughter while filming.

You can listen to all his witty puns in the video below. But be warned, it’s so fun you might need to run to the bathroom yourself!