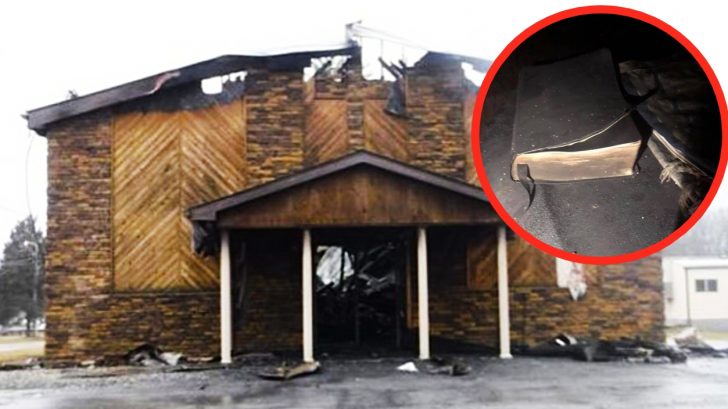 Just before 1:00 a.m. on Sunday, March 3, the Coal City Fire Department in West Virginia received a dispatch assignment to a structure fire in nearby Grandview, West Virginia. When they got there, they acted quickly to save the structure along with local responders from the Beaver Volunteer Fire Department.

The department, which automatically publishes the calls it responds to, shared the news of its response to the fire at Freedom Ministries Church. “Currently responding to a STRUC> STRUCTURE FIRE call.”

CCFD includes the code for each call in the reporting and sometimes will follow up with more information. In this case, it was a few paragraphs about what they encountered and some photographs that will truly leave any person of faith breathless.

The average temperature inside a structure fire reaches 1,100 degrees. This fire was well in excess of 970 degrees Fahrenheit and according to the CCFD’s Facebook post, it got so hot that firefighters had to actually turn back.

“Though odds were against us, God was not.”

After extinguishing the fire, the church had been declared a total loss as most of the building was absolutely charred and torched by the massive blaze. As firefighters began to investigate further – they noticed something very peculiar.

These brave firefighters began to realize that none of the church’s bibles had burned – or were even charred. It was a miraculous discovery that only grew larger when they noticed the church’s massive cross was fully intact and still upright.

“Picture this, a building so hot that at one point in time, firefighters had to back out. In your mind, everything should be burned, ashes. Not a single bible was burned and not a single cross was harmed!! Not a single firefighter was hurt! Prayers for the pastor and the congregation today.”

There is no better explanation than what these folks have said already – “Though odds were against us, God was not.”

The congregation has stated that they will rebuild and continue serving their beloved members. Watch this incredible story covered by CBS Pittsburgh below.