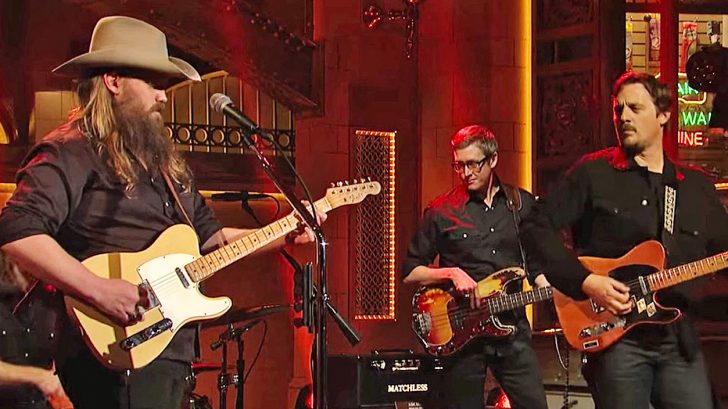 After his first Saturday Night Live appearance went over so well, Chris Stapleton returned to the program with much fanfare in January 2018. The show fell just one day prior to the Grammy Awards, during which Stapleton earned a total of three awards: Best Country Song, Best Country Album, and Best Country Solo Performance.

So when he appeared on SNL, everyone was unaware that they were listening to a future 2018 Grammy winner. They were also unaware of something else that Stapleton had in store for his performance…a special guest.

A few hours before the show started, Stapleton shared a video on social media that had fans all fired up, and in a good way. Shot against a black backdrop, the video shows Stapleton staring straight at the camera. Suddenly, someone emerges behind him and snatches his cowboy hat before joining him at his side.

That someone was none other than Sturgill Simpson, who along with Stapleton, is often championed for his more traditional-leaning approach to country music. The two are known for working with producer Dave Cobb, who is also famous for producing material for Jason Isbell.

On its own, the video didn’t mean that much. But it was Stapleton’s caption that sent everyone into a frenzy. “Tonight we’ve got some extra Kentucky in NYC,” Stapleton wrote, referring to the fact that both he and Simpson are from Kentucky.

Of course, people automatically assumed that Simpson would join Stapleton on SNL, and their guesses were right on the money. At first, Stapleton appeared to be by himself as he sang “Midnight Train to Memphis,” a song on his third studio album, From A Room: Volume 2. Later, the lights came on to reveal Simpson, who was standing next to Stapleton playing guitar.

Simpson then jumped in to lend his vocals to the song’s second verse. He also chipped in on Stapleton’s next song, which was “Hard Livin’.” Another track off of From A Room: Volume 2, Stapleton and Simpson sang “Hard Livin'” as a duet. As if that wasn’t epic enough, their performance also featured a small guitar solo from Simpson mid-song.

Any performance between Stapleton and Simpson is one that sells itself. So we’re going to let you jump right in to enjoy them singing “Hard Livin'” in the clip below.

Watching this makes us hopeful that these two will one day record a duet together!