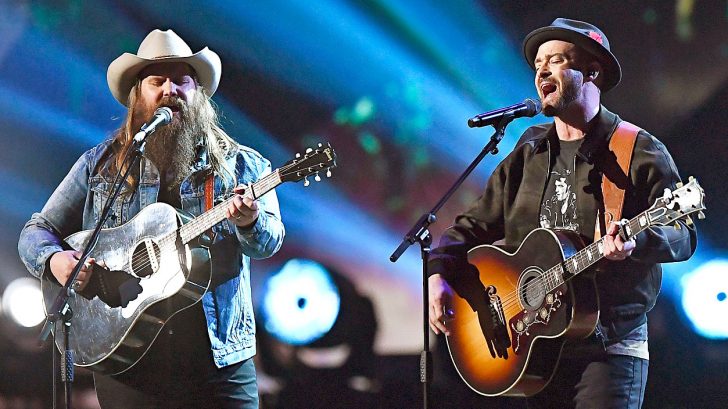 Although country music only had one artist scheduled to perform at the 2018 Brit Awards on Wednesday (February 21), the genre was well-represented through that artist. As one of the leading stars in the country genre right now, it made perfect sense that Chris Stapleton was chosen as one of the select few performers who got the chance to sing during the ceremony.

Stapleton wasn’t alone for his performance. He was joined by his good friend Justin Timberlake, who famously sang with him during his breakout performance at the 2015 CMA Awards.

Now, Stapleton and Timberlake have a new duet, and it’s currently sweeping the charts. The song, titled “Say Something,” was co-written by Stapleton and Timberlake and released on January 28. The latest Billboard chart data shows that “Say Something” has climbed as high as the 17th spot on the Billboard Hot 100. Following the duo’s performance of the song at the Brit Awards, it’s sure to climb even higher.

Stapleton and Timberlake began teasing their performance with a matching set of images and captions on Instagram. It all started with Timberlake, who posted a photo from his rehearsal with Stapleton. He comically pointed out who he was in the photo, writing “I’m the one in the beanie.”

Following suit, Stapleton shared the same photo and wrote a similar caption. He also pointed out his own headgear, writing, “I’m the one in the cowboy hat.”

As you would expect, these images only got fans even more hyped up to watch Stapleton and Timberlake perform at the Brit Awards. The duo certainly didn’t disappoint with their performance, which was just as epic as everyone had hoped for.

In case you missed it, be sure to check out Stapleton and Timberlake’s Brit Awards duet on “Say Something” in the clip below. Their duet starts at the 2:20 mark.

Magic always happens whenever these two share a stage!