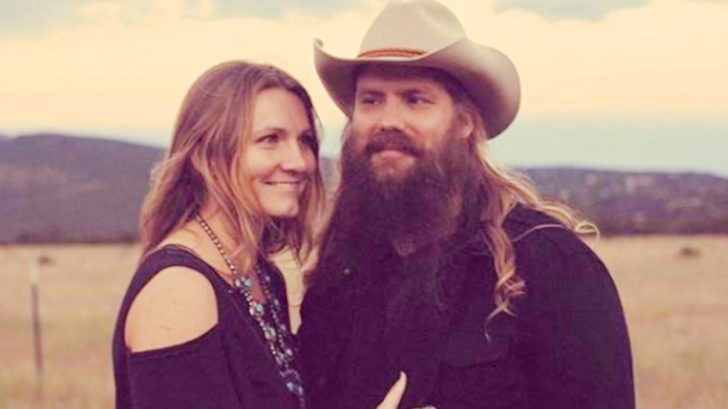 During a show in November in 2018, Chris Stapleton had some exciting news to share with the crowd. He revealed that his wife, Morgane, was expecting their fifth child, just months after she had given birth to twin boys!

In addition to their twin sons, Chris and Morgane also have an older son and daughter. The couple has been famously secretive about their kids’ identities, rarely sharing photos of them (if at all).

For the longest time, fans didn’t even know what Chris and Morgane’s two eldest children were named. But Chris finally said their names in public during an acceptance speech at the CMA Awards in 2018.

“Waylon and Ada, if you’re out there tonight, and the twin boys, and the one on the way, I love you so much,” he said.

Although the twins’ names are unconfirmed, the Stapletons did break normal protocol when they were born. Morgane shared a photo of the two baby boys following their birth, leaving fans to wonder if they would do the same when Baby #5 finally arrived.

After being inactive for two weeks, Morgane took to Instagram on Sunday (May 12) to share the happy news that Baby Stapleton was here! While she didn’t reveal the little one’s exact birthday, it’s clear that the sweet baby made it just in time for Mother’s Day!

“The most perfect Mother’s day…I wish all you Mama’s the happiest of days today!” Morgane wrote.

Morgane did not share in her post if their newest addition is a boy or a girl, and she didn’t share a name either. And the picture doesn’t give too much away, since it just shows the new baby’s hand and arm.

The little one is wrapped up in a yellow and white striped outfit, while a blanket with a multi-colored firework-like design rests under Morgane’s hand. So there’s no pink or blue to be seen to figure out if Baby Stapleton is a boy or a girl.

More Babies In The Future?

Maybe one day Chris and Morgane will share more about their newest family member, but if they don’t, we totally respect their decision! It seems possible that they may welcome more little ones into their lives in the future, based on what Morgane said during an interview with Chris on the red carpet at the Grammys this year.

When asked how she feels about her husband’s love songs, Morgane responded with “Yeah, we stay pregnant.” Since we don’t expect Chris to stop writing love songs any time soon, maybe more Stapleton babies will arrive in the future?

Congratulations to Chris and Morgane on their new addition!