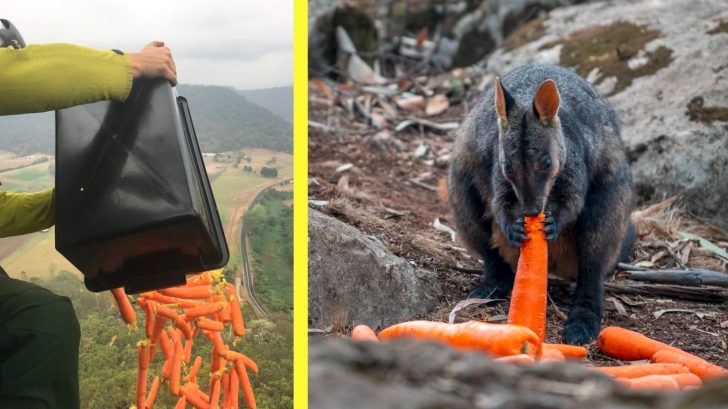 The government in Australia is trying to save many of its wildlife population by dropping thousands of pounds of food from the skies into affected areas where animals have fled to escape the wildfires.

Just recently, on January 11th, 2020, the Minister for Energy & Environment for New South Wales, Matt Kean, tweeted out a photo of government workers participating in “Operation Rock Wallaby” and dumping giant buckets of veggies from helicopters.

The project is intended to help ensure the survival of one of Australia’s most endangered marsupials – the Brush-Tailed Rock Wallaby.

“The wallabies were already under stress from the ongoing drought, making survival challenging” without help, said Minister Kean in a statement.

A report on MSN News says that the initial assessment shows fires have completely decimated the habitat for “several important brush-tailed rock-wallaby populations.”

This food drop, which consisted of carrots and sweet potatoes among other foods, is the largest one ever performed for these at-risk creatures. In addition to dumping food from the sky, the government is also monitoring the animals with cameras to make sure the operation succeeds without complications.

As of 2014, there was only an estimated 20,000 Brush-Tailed Rock Wallabies left in the wild. Now, with the severe drought and months-long wildfire devastation, that number could be far less.

More than one billion total animals have been killed by the fires since they began in late 2019 and Australia already has the highest rate of extinction for mammals – so this is really pushing their biodiversity to the breaking point.

American firefighters have arrived in Australia to help them battle these terrible blazes, but there are still massive fires to overcome…and an ultra-heavy rainfall forecasted over the next week. This is expected to do a great deal of damage with massive flooding.

Our thoughts and prayers are with the people and wildlife of Australia as they try to survive and overcome this terrible situation.