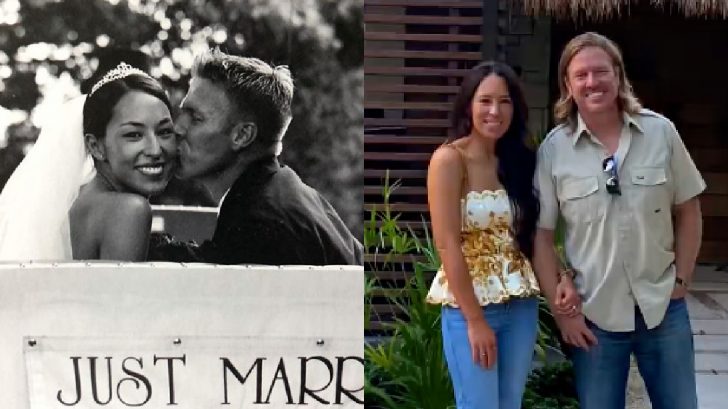 Fixer Upper stars Chip and Joanna Gaines are celebrating 18 years of marriage, and they’re doing it in style! Joanna documented the milestone anniversary on Instagram with a slide show of photos and videos set to the tune of James Taylor’s “Mexico.”

The slideshow featured clips of the couple enjoying dinner together, lounging poolside, and taking in the local scenery. “18 years. Thankful to be on this adventure with you—happy anniversary @chipgaines ❤️” she captioned the post.

The famous pair wed in 2003, two years after they met. Chip says that he first fell in love with Joanna after seeing her photo hanging on the wall of her father’s Firestone Tire shop.

“Her dad made the mistake of putting a pic of the family behind the counter at his shop. I knew I’d marry her one day just by the picture on the wall,” Chip told Popsugar in 2018.

Chip finally got to meet Joanna in person when he took his car in for brake repairs. During that visit the two hit it off and Chip secured a first date with the dark-haired beauty. They married two years after meeting and less than a decade later found themselves as some of HGTV’s biggest stars with the success of Fixer Upper, a show that the unique talents of both Chip and Joanna and made them into a home renovation show that achieved uncharted success.

One of the many reasons why Fixer Upper succeeded was because of the incredible chemistry between the leading couple. The perfect example of “opposites attract,” Chip and Joanna played off of each other’s talents, whit, humor and weaknesses to create an entertaining and informative show that viewers could relate to.

In an interview with I Am Second, the power couple spoke out about how their opposite personalities work so perfectly together.

“If you give Chip a boundary he’s gonna break that boundary. If you give him a rule he’s not gonna follow it. If you tell him he can’t go past this line he’s gonna put his toe over it,” Joanna said of her husband. “Fear and failure doesn’t even cross his mind.”

Chip described his wife, saying: “Joanna is like the purest, most stable person I’ve ever met.”

“For someone who’s a rule follower to a T, it’s an adventure,” said Joanna of her marriage. “If I didn’t have Chip Gaines in my life I would still be dreaming in my head, but not acting out on any of that, not living it out.” Joanna turned to Chip. “You push me out of my comfort zone. I like comfortable. I like predictable. And you push me.”

Watch Chip and Joanna Gaines’ I Am Second interview below.