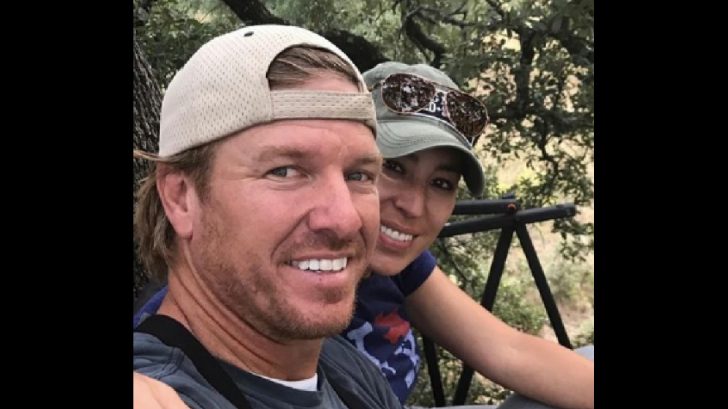 We can always count on Chip Gaines for a laugh. The Fixer Upper star and his wife, Joanna, have made a career off of their talent and their humor. So, it’s no surprise that Chip turned a compliment from his wife into a laugh on Father’s Day.

On Sunday (June 20), Joanna shared a post on Instagram celebrating Chip on Father’s Day. The post showed photos that captured Chip relaxing on the couch watching the college World Series while his daughters, Ella and Emmie, braid his hair. The photo caption read: “You’re the best kind of dad. The kind that lets his daughters french braid his hair right before you take them shopping (even if the College World Series is on). We sure love you @chipgaines ❤️”

Chip jokingly replied in the comments that the braided look was what he wanted to be wearing at the end of his life.

“This is the way I want it to be when i go meet Jesus.. and by the way I’m looking here it might be fairly soon,” the 46-year-old dad of five wrote.

Joanna followed up with a post showing Chip and the couple’s youngest son, Crew, catching a Sunday afternoon nap on the couch. While fans praised Chip’s relationship with his kiddos and called him “such a great daddy,” Chip didn’t appreciate the post, apparently.

“Ok…. I’m going to have our attorney draw up a cease-and-desist re: your insta. Or at the very least a 1st look option period.
Either these angles you are catching of me are extremely unflattering (did you see my legs in the previous post??) OR I’ve gotten really unattractive the last several months,” Gaines commented.

Chip and Joanna recently celebrated their 18th wedding anniversary with a child-free tropical vacation in Mexico. The couple wed in 2003, two years after they met. Chip says that he first fell in love with Joanna after catching a glimpse of her in a photo hanging on the wall of her father’s Firestone Tire shop.

“Her dad made the mistake of putting a pic of the family behind the counter at his shop. I knew I’d marry her one day just by the picture on the wall,” Chip told Popsugar in 2018.

Chip got to meet Joanna when he took his car in for brake repairs, a visit that scored Chip a first date with the dark-haired beauty. Less than a decade after their wedding, the pair became some of HGTV’s biggest stars with the success of Fixer Upper.

One of the reasons Fixer Upper was such a huge success is because of the incredible chemistry between the leading couple. In an interview with I Am Second, the power couple spoke out about how they work so perfectly together.

“If you give Chip a boundary he’s gonna break that boundary. If you give him a rule he’s not gonna follow it. If you tell him he can’t go past this line he’s gonna put his toe over it,” Joanna said of her husband. “Fear and failure doesn’t even cross his mind.”

“If I didn’t have Chip Gaines in my life I would still be dreaming in my head, but not acting out on any of that, not living it out.”

One thing’s for sure…Chip and Joanna Gaines have something special. Watch one of our favorite Chip and Jo moments in the video below.