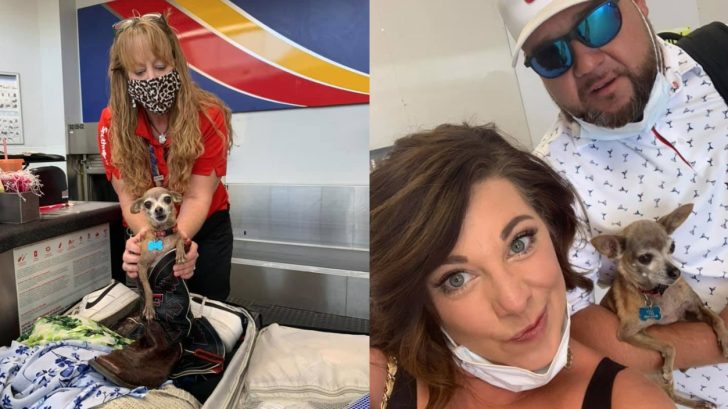 Jared and Kristi Owens from Lubbock, Texas were headed on vacation to Las Vegas, Nevada to try to enjoy some one-on-one time when they realized one of the family members decided to tag along.

Jared said they had gotten to the service desk to check their bags when one of their suitcases measured about six pounds overweight.

As they opened the case to rearrange their belongings and take a couple of things out, they found the reason why the bag was overweight.

Icky, their beloved chihuahua’s head comes popping out of one of Jared’s boots. Apparently, the dog had burrowed inside the boot laying in the suitcase and they didn’t realize it.

“Literally, there’s our dog coming out of my boot with her head bopping up. She’s the burrower, that’s what she does. She burrows in clothes, she burrows in, obviously suitcases now.”

Fortunately, Southwest Airlines employee Cathy Cook went above and beyond and actually offered to watch their dog for them so they could catch their flight and have their vacation.

“They have got a heck of an employee in Cathy,” Jared said. “She went above and beyond and never made us feel, you know, they could have turned us in saying we were trying to smuggle a dog to Vegas or something.”

Even though it’s kind of a funny story, things could have gotten a lot worse if they had not found the dog before boarding the flight. Cathy ended up keeping the dog while they went on vacation and then returned her to her owners after they came back.