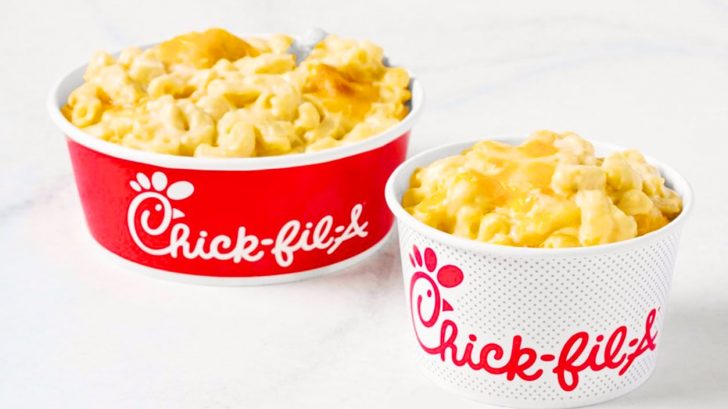 Chick-fil-A has already been named America’s favorite fast food chain. Now, consumers are sure to love it even more after they hear about the latest addition to its menu.

The restaurant is known for making items available on a seasonal basis, such as its famous peach milkshake. It also tests different items that only make a limited time appearance on the menu, such as its Frosted Sunrise drink.

But now, the company appears to be testing the waters to see if it can add a new, full-time side dish to its menu. And it’s a dish y’all are sure to love…mac and cheese.

Everyone knows that mac and cheese and fried chicken go together like PB&J. So it makes perfect sense why Chick-fil-A would want to add the cheesy pasta to its menu.

While mac and cheese will soon make a real prominent appearance at various Chick-fil-A locations, the company has actually been running tests with the dish since 2017. According to Business Insider, multiple mac and cheese recipes were considered, including one that featured cauliflower.

Chick-fil-A eventually settled on a recipe, and placed mac and cheese on the menu in four different states in 2018.

The dish was clearly a hit, because Chick-fil-A is introducing mac and cheese nationwide! It’s the restaurant’s first permanent side dish addition to the menu since 2016.

A statement issued by Chick-fil-A said that mac and cheese could be found in all restaurants starting in August. Amanda Norris, Chick-fil-A’s executive director of menu and packaging, spoke about the new side dish:

“Mac & Cheese is the quintessential comfort food, and something we are so excited to offer our guests at Chick-fil-A. We think it’s the perfect pairing with our Original Chicken Sandwich, nuggets and our grilled chicken offerings, but it’s also great on its own as a snack. Mac & Cheese is also available on our catering menu as a quick pick-up for a larger gathering. It has a delicious, homemade taste!“

Are you one of the lucky people who has already tried Chick-fil-A’s mac and cheese? If so, we’d love to hear what you thought. It looks so tasty!