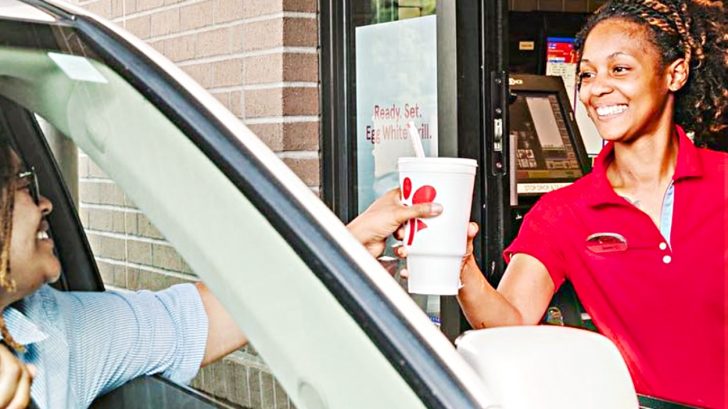 This widely popular fast food joint has been the center of attention lately as Forbes recently announced it is now McDonald’s biggest competitor. But there’s one thing a Chick-fil-A employee won’t do that is commonplace at other establishments – and that is to say, “You’re Welcome.”

Chick-fil-A workers have been known to be overly cheerful about the job they are doing. From its wholesome image to its signature fresh-squeezed lemonade and highly-addictive sweet tea, Chick-fil-A service has even been joked about in a rap parody by comedian, Jaron Myers.

But when you have Sundays off and are paid well above minimum wage, it is no wonder why they can’t wipe those smiles off their faces! Today even reported that employees at specific Chick-fil-As will make more than some teachers in California in 2019.

When we learned that the employees at the chicken-chain restaurant don’t say “You’re welcome” after customers thank them for their meal – we were a little confused.

As legend has it, when Truett Cathy (the chain’s founder) stayed at a Ritz Carlton, they overheard an employee respond to the guest’s thanks with, “My pleasure,” instead of the customary, “You’re welcome.”

To Cathy, it set the Ritz apart and he decided to incorporate it into his own company.

One Reddit user who works at Chick-fil-A further explained, “It’s a courtesy thing. ‘You’re welcome’ seems too indifferent and we’re told to use elevated language. Besides, we could get in trouble if we don’t say it.”

With service like that, it is no wonder the chain has grown so much since it was first opened!

That feeling when you try your first order of Chick-fil-A Nuggets.? Photo Credit: @ruthie_cliff

The Truett legacy of customer service stems from a long history of hard work and family business. You can learn more about it in the video below.