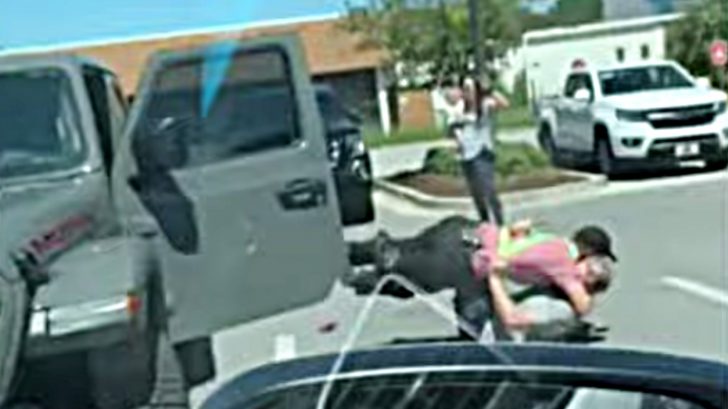 According to a Chick-fil-A located in Fort Walton Beach, Florida, a woman was taking a baby out of her car in the parking lot when a man approached her with a stick in his hand, grabbed her car keys, and forced his way inside her vehicle.

Okaloosa County Sheriff’s Office reported that the woman screamed at the top of her lungs for help and a Chick-fil-A employee responded, running over to her aid and tackling the man.

Police said the worker was able to subdue 43-year-old William Branch, who was later charged with battery and carjacking with a weapon, and as of early Thursday (Sept 15), he is currently being held at the county jail.

A one-minute video filmed by a bystander who was at the Fort Walton Beach fast-food restaurant shows the heroic moment the Chick-fil-A worker, Mykel Gordon, tackled the man, wrestled him to the ground, put him in a headlock, and held him there until others showed up to assist him.

The woman William attacked was holding a baby in her arms and was screaming, “Somebody HELP,” right before Mykel jumped in and saved the day.

Once others gathered around, William knew he had been caught and stopped fighting and just sat on the ground while onlookers called the police to come and arrest him.

As the man sat on the ground, a second woman holding an infant can be seen screaming at him, “She had a baby in her hands! How dare you!”

Okaloosa County Sheriff’s Office reported that William punched the Chick-fil-A worker in the face during the tussle, however, both women holding babies were uninjured.

“A major shout-out to this young man for his courage!” the sheriff’s office wrote on Facebook.

The Washington Post reported Matthew Sexton, the manager of the Chick-fil-A saying the incident was “alarming” and, “I couldn’t be prouder of his incredible act of care.”

Watch The Intense Tussle In The Video Below