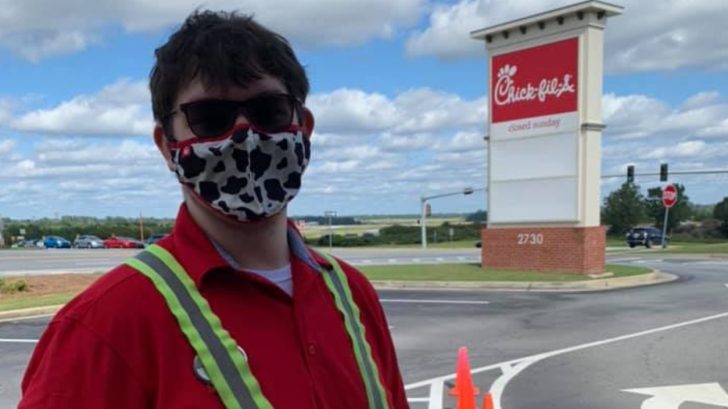 Chick-fil-A released a statement on Facebook praising Zack “Cowboy” Kokenzie from Columbus, Georgia for responding so quickly to avert a life-threatening situation on October 12, 2020.

“Zack and our team acted quickly in rescuing a child from a life-threatening situation. I am proud of Zack, Justin, Zachary B. and our team for their quick thinking and quick responses,” store owner/operator Alex Vann said on the Chick-fil-A Manchester Expressway Facebook.

Zack, an employee at Chick-fil-A was expediting orders in the drive-thru line when he overheard panicking cries from a car in the line. When he looked up he noticed a kid in the backseat of a car had gotten the seat belt wrapped around his neck and it was choking him.

The panicked and stressed father tried to free his child but the seat belt was locked in tight and had the kid trapped. Another customer waiting in the line got out of their car, walked over, and also tried to help the kid get free but nothing worked. The child’s siblings who were also in the car were screaming and crying out for their brother.

Zack is a certified Eagle Scout trained in CPR and quickly reacted by walking over to the drive-thru window, asking a fellow coworker for some scissors. Zack reached through the window and cut the seat belt freeing the kid from his entanglement and the father from his stress.

“This could have been far worse, but Zack and others were in the right place, with the right training and the right attitude to potentially save the life of one of our customers. We are glad everyone is alright,” Alex said.