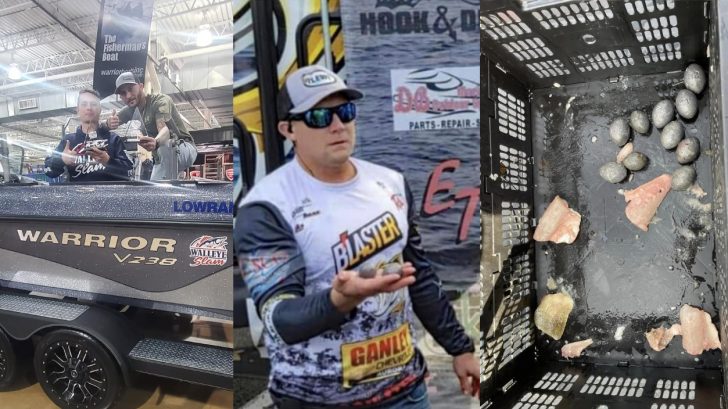 WOW! Can you believe it? … The biggest walleye fishing story of all time that we covered two days ago is not even about honest men catching fish, but about two guys that got caught cheating to win in a tournament with a $30,000 prize by putting weights in their fish.

Jason Fischer, the director of the tournament who weighed the fish and caught the men cheating told Bigwater Fishing, “It’s heartbreaking, it’s sickening. It’s a real stain on the sport. It’s a shame that the biggest walleye story ever is about cheating, not about the amazing fishing on Lake Erie.”

According to a columnist for the Toledo Blade, Matt Markey, said he has been following the story and after doing research into Chase Cominsky and Jake Runyan, the two cheaters, he has learned some shocking information.

Markey estimated that Cominsky and Runyan have racked up more than $400,000 in winnings and endorsements before going into the fishing tournament after winning the fall season’s biggest events of 2021, the Fall Brawl and Walleye Slam.

Cominsky and Runyan were said to have won a brand new Warrior fishing boat alone worth $151,670 for winning the Walleye Slam, in which they sold the boat and split the money.

However, after winning the Fall Brawl, they were disqualified for failing a polygraph test and they lost out on taking home a $125,000 Ranger boat prize.

At the time, Runyan denied the results of the failed polygraph tests and attempted to win back the money and his reputation.

Runyan ironically told Cleveland.com in December, “It wasn’t just the loss of a very expensive boat we had rightfully won, it was having our names drug through the mud, and smeared on social media and among walleye fishermen around the area.”

Now after being caught red-handed, an investigation has been launched by the Ohio Department of Natural Resources who says they are in possession of all the tournament evidence. In addition to that, local prosecutors are investigating the two men as well.

Fan Stream Sports reported Cuyahoga County Prosecutor Michael C. O’Malley saying, “My staff will be meeting with officers from the Ohio Department of Natural Resources (Tuesday) regarding this matter. I take all crime seriously, including attempted felony theft at a fishing tournament. These individuals will be held accountable. My best hope is that they’ll be criminally charged with felony fraud, and to avoid jail time they’ll fess up to past cheating. Hopefully some of that money is still around to try to make things right.”

Since Cominsky and Runyan have become social media stars for all the wrong reasons, they both have gone quiet. Runyan’s Instagram page of 46,000 has gone from public to private and the pair’s Facebook page has also been deleted.

Markey says, “The tournaments just want this all to go away. The fall tournaments start on October 15, and they’ll have about $800,000 in prizes and cash. It’s a big frickin’ mess.”

More On The Developing Story In The Video Below