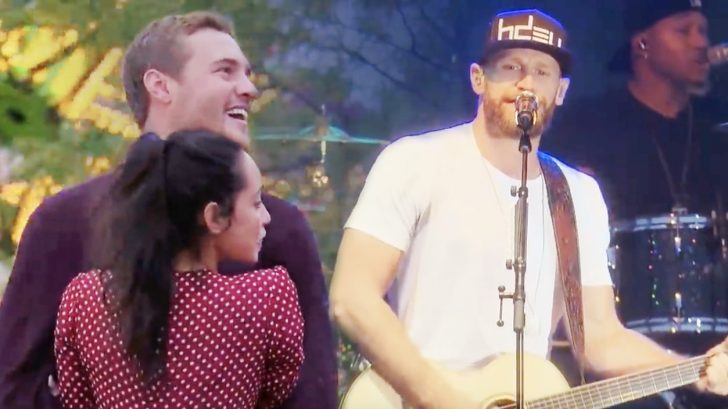 What started out as a picture-perfect one-on-one date between ABC’s The Bachelor Peter Weber and contestant Victoria Fuller turned into a very awkward encounter.

On Monday night’s (Jan 27) episode of the long-running franchise, Weber and his remaining women traveled to Cleveland, Ohio for the week. He and Fuller’s date began with a plane ride over the city, piloted by The Bachelor himself. The landed near the amusement park Cedar Point in Sandusky, Ohio and had the entire park to themselves.

They enjoyed the day riding roller coasters and all the rides, but in his interviews, Weber kept alluding to a surprise he was so excited for Fuller. The surprise was that country singer Chase Rice would be performing for them and Weber was excited because he knew Fuller loved country music.

When Fuller and Weber walked up to the concert area where fans, and Chase Rice, was waiting, she got a worried look on her face, and now we know why. It turns out she used to date Rice, the person who was on stage about to serenade her and her new love interest. Awkward!

The whole thing was so awkward because viewers knew what was going on, but Weber had no clue. At one point, Fuller was singing every lyric to the song, which Weber was surprised by.

He even talked to Rice after the concert, who wondered how far into the show they were. Later in the evening, Fuller tearfully confessed her past with Rice, and after talking things over, Weber gave her a rose, asking her to stay one more week.

But things didn’t turn out so great on Rice’s end. Apparently, he had no clue his ex was on the show, let alone on this one-on-one date that he had to perform for.

“I don’t know if it’s the producers, or if they just got lucky. I know what I think, but I’ll let everybody else figure out what they think,” he told PEOPLE, saying that he “was really pissed off.”

“I was just going on there to try to promote ‘Lonely If You Are’ and ‘Eyes on You,’” he said, “and I wanted absolutely nothing — if there’s anything I ever wanted, it’s to have nothing to do with the drama of that show.”

See the whole thing go down in the video below.