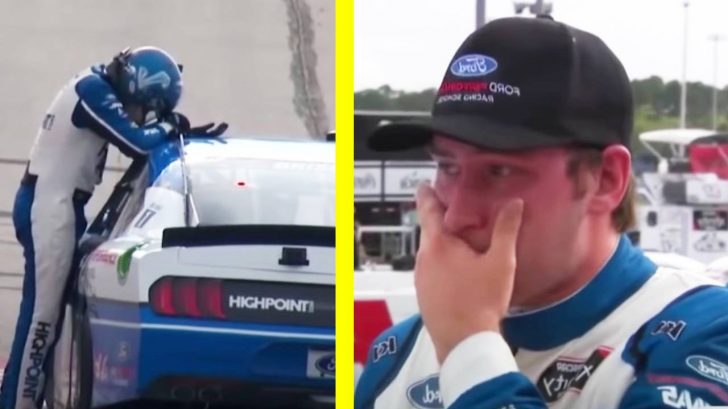 The second in-person NASCAR race held in months ended on Thursday with tears.

Darlington Raceway in South Carolina was the site of the first two NASCAR races since all in-person sporting events were cancelled due to coronavirus. The first race was held on Sunday (May 17) with a second on Thursday (May 21).

With 50 laps to go, Chase Briscoe, who was driving the No. 98 car, took the lead in the Toyota 200 and according to a post-race interview, he began to cry. He knew what this win would mean to him and his family, especially his wife.

Just a few days before the race, he and his wife found out their unborn daughter didn’t have a heartbeat.

“When I took the lead with 50 laps to go, I was crying in my car. This is more than a race win. This is the biggest win of my life after the toughest day of my life. To be able to beat the best there is, is so satisfying,” he said.

On Wednesday (May 20), Briscoe shared two screenshots of a statement he wrote in his Notes App on Twitter, with the caption, “Yesterday was the hardest day of my [email protected]_ and I heard the worst news any soon to be parent could hear… That we wouldn’t be welcoming our daughter to the world on December 1st. I know God has a plan and we may not understand it but we seek Him and trust Him.”

In the note, he explained that on May 19, they had found out they would be welcoming a baby girl and were excited to hear the heartbeat for the very first time. Since Briscoe was prepping for the race, he was unable to go to the doctor’s appointment, but he FaceTimed his wife during the appointment from the raceway so they could still experience it together.

Instead of being told the baby had a healthy heartbeat, they were told, “I’m so sorry.”

Yesterday was the hardest day of my life. @MarissaBriscoe_ and I heard the worst news any soon to be parent could hear… That we wouldn’t be welcoming our daughter to the world on December 1st. I know God has a plan and we may not understand it but we seek Him and trust Him. pic.twitter.com/71uLSeQdsP

Even though he was going through heartbreak, Briscoe still had a job to do – win the Xfinity Series race, and he did just that. After he exited his car, he knelt down and bowed his head and was visibly shaking from crying.

Once he stood up and took off his helmet, he continued to cry as camera crews made their way to him for a post-win interview.

He told the cameras, “This is the No. 1 win. Honestly, winning the Daytona 500 couldn’t even top the feeling of just, like I was saying earlier, the ups and downs. This is what my family needed and what my wife needed.“

Our thoughts and prayers are with the Briscoes during this devastating time.

Watch his interview after the race below.