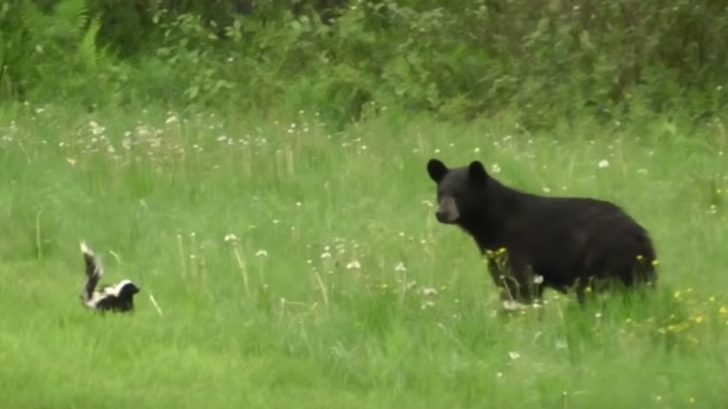 A woman living in a rural part of Caribou, Maine was on the phone with her husband when she spotted a black bear in her backyard and she took out her phone to record the fascinating wild creature. It milled around in the tall grass just sniffing around and checking out the area.

She zoomed in on the bear to get a closer look at it chewing on the grass when it turned its head to look at something that grabbed its attention. All of a sudden, it took off running towards a small skunk that was a few yards away in the tall grass.

The bear charged at the skunk. The skunk may have been small but it stood its ground vigilantly and faced the bear head-on. The moment the bear got a little too close for the skunk’s comfort, it turned around and released a visible stink spray in the bear’s face.

The bear was clearly deterred from trying to make the skunk a meal and swiped the air in front of its face. It shook its head, trying to get rid of the stink. The bear didn’t want to stick around for another spray and took off running into the woods to get away. The little skunk successful in its battle, victoriously walked off in the other direction.