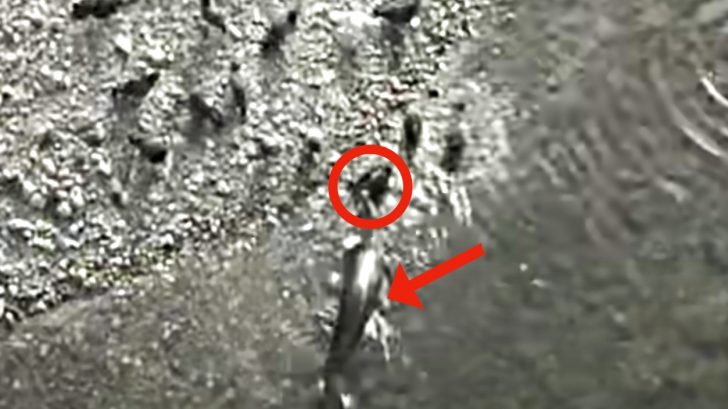 Have you ever seen footage of catfish preying on pigeons and trying to eat them for dinner? Video footage shot in 2011 at Tarn River in southern France showed just that.

Frederic Santoul, an assistant professor of biology and ecology at Paul Sabatier University in Toulouse, said he had been researching wels catfish for over 10 years when he received a phone call from a fisherman saying he was fishing at Tarn River.

Frederic says he keeps in contact with many fishermen who help him collect information on the stomach contents and additional data that he uses to study the ecological impact of the large species of catfish.

“He told me, ‘Something strange is happening in the town of Albi,’” Frederic said, Field & Stream reported. “It seemed that some catfish were foraging on pigeons.”

Tarn River is known to have shallow gravel bars on its shorelines and many wild pigeons take advantage of them to take a bath and get a drink.

Footage taken from a drone showed the wels catfish waiting near the gravel bars to snatch up one of these tiny pigeons, sometimes even beaching themselves in the process of going after one.

Frederic says that wels catfish are native to eastern Europe but they are an invasive species in Western Europe and were introduced into the waterways by anglers during the 1970s and 80s. They are now found all throughout France, Italy, and Spain.

They can grow up to 10 feet long and weigh as much as 300 pounds. The females can lay as many as 25,000 eggs when they spawn and the fish can live for decades.

They now compete with western Europe’s native species, such as salmon, lampreys, and allis shad, which is what Frederic was studying until he found out they were also hunting pigeons.

The drone footage allowed Frederic and other biologists to observe the wels catfish lurking in the shallows with their dorsal fins and backs protruding above the surface of the clear water, waiting for a pigeon to get close enough so they could eat it.

As the birds fight for their position to get the best bathing spots on the river, the catfish can be seen moving in with their mouths open ready to engulf a pigeon.

“The first time we saw this, we said it was exactly the same beaching behavior that is well known in the killer whales,” Frederic said. “It’s incredible. Killer whales breathe oxygen from the air.” However, “Catfish need oxygen from the water. So it’s more dangerous for catfish because if they stay [on land] too long, it can be fatal.”

In his paper, he outlined that over 54 beaching attacks were recorded with 40% of those attacks ending up with the fish beaching at least half of its body onto land. The wels catfish was able to make a successful kill about 28% of the time which is similar to a killer whale’s percentages.

Watch Footage Of The Catfish Eating Pigeons Below