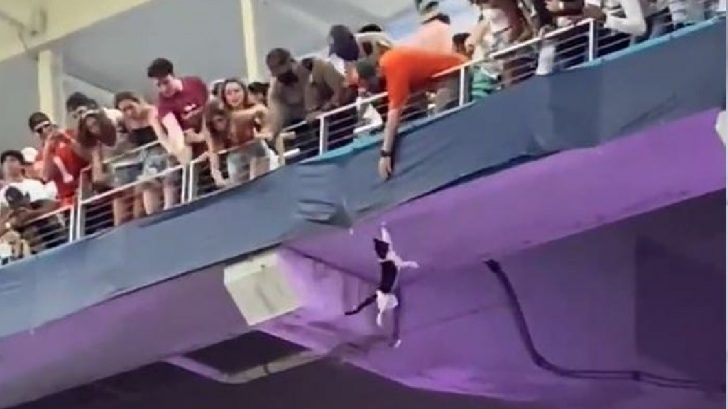 The catch of the night didn’t happen on the football field during Saturday’s game between the Miami Hurricanes and Appalachian State. It happened when fans caught a cat falling from a stadium’s upper deck.

Halfway through the college football game at Hard Rock Stadium in Miami Gardens, Florida, fans turned their attention away from the field and onto a cat that found itself dangling from the stadium’s upper deck. In footage shared to social media of the event, fans can be heard gasping and yelling as the frightened feline slowly lost its grip and fell to the lower deck.

But, game-goers directly below the cat came through with a rescue as they caught it in the American flag they had been waving during the game. The cat’s hero raised it up for everyone to see and the crowd immediately began to cheer and applaud.

The cat didn’t seem all that thankful for the rescue as it clawed and scratched to get away from its rescuers and the crowd surrounding them.

See footage of the rescue of the newly-named Hard Rock Cat in the clips below.

Well this may be the craziest thing I’ve seen at a college football game #HardRockCat pic.twitter.com/qfQgma23Xm