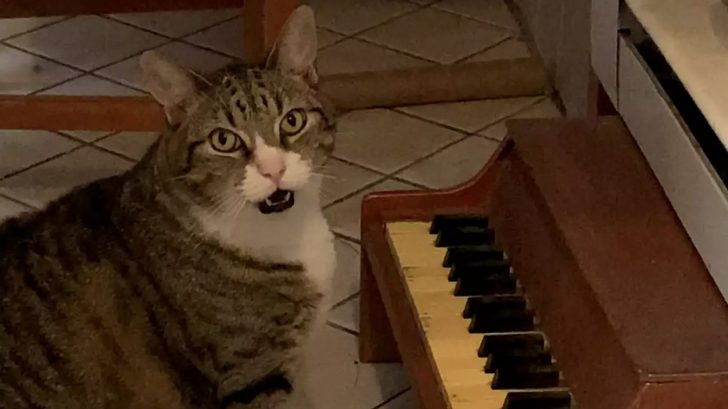 Meet Winslow, a cute tabby cat, who plays piano whenever he wants to eat.

my most perfect boy, my softest son ?

Winslow’s owner, Kate Nyx is a musician from Philadelphia. She and her husband adopted him when he was just eight weeks old. She said the cat was trying to fight a dog when she first found him in her cousin’s backyard.

Winslow used to run around screaming all the time, according to Kate, and she would say to herself, “This is no good.”

She decided to buy him a small piano on eBay when she was in high school so she could teach him how to use it to express himself and communicate his needs.

“He started showing interest in the piano when he was a baby, playing the notes and looking underneath trying to find where they were coming from,” Kate said to LADbible.Com. “The piano is another way to communicate, so he’s not screaming bloody murder.”

You can see Winslow asking for his dinner using the piano in the video below. He plays the piano for Kate to bring him food, and quickly. With the piano trick, Kate was able to help Winslow, now a seven-year-old cat, switch his energy and curiosity towards the instrument.

“He learned that I encourage moving his paws up and down the keyboard, so he does that when he really wants something,” she told Tyla.com.

Seriously, my boy is famous. (And being fat shamed in the comments. ☹️)