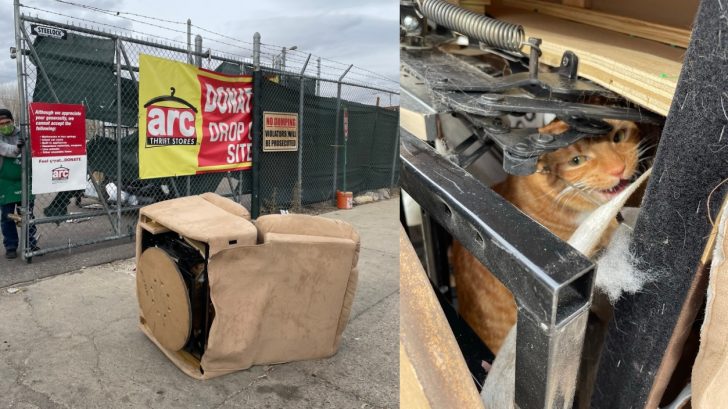 The Denver Animal Shelter shared an interesting story about a cat that was found outside a thrift store stuck in the cushions of a recliner that was donated on New Year’s Eve.

The Colorado thrift store employees said that they arrived on New Year’s morning and started sorting through the donated items when they discovered the orange cat curled up inside.

They weren’t sure if the cat was a stray animal looking for a warm place to rest for the night or if it was a pet that was accidentally donated along with the chair.

Nevertheless, they called the Denver Animal Shelter who came and safely removed the cat and took it back to the shelter.

They scanned it for a microchip to see if they could get any information on it and found that the cat did have a chip, but the chip wasn’t up to date with any usable information.

When things looked like they were about to hit a dead end, that’s when the thrift store got a frantic call from the recliner’s original owners. The family said they were moving to a new home and realized their cat named Montequlla was missing.

“When Montequlla’s family realized that she was missing, they contacted the thrift store who directed them to contact Denver Animal Protection,” the shelter wrote on Facebook.

When the family was moving furniture, Montequlla had apparently run under the recliner when the footrest was up to get out of the way of moving. When she did, however, the family didn’t realize it and closed their pet inside the chair, trapped.

The cat didn’t make any noise, so they never noticed her and went on to take the old recliner off to the thrift store and donated it.

It wasn’t until the apartment was almost empty that the owner figured out what had possibly happened and frantically called the thrift store to ask them about the recliner.

The store informed them that they handed Montequlla over to animal control.

Fortunately, this story has a happy ending and she was reunited with her family.

“We are so happy for the ending to this story and are thankful to everyone involved in getting this sweet cat home safely,” Denver Animal Shelter wrote.

The Denver Animal Shelter released a public statement on Facebook.