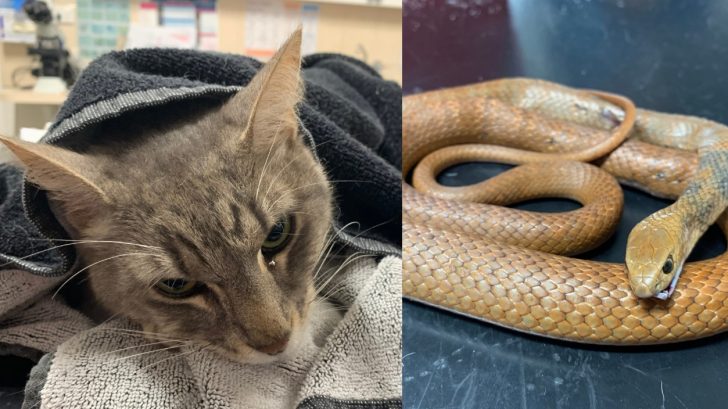 Arthur, the domestic house cat, was hailed as a hero in Queensland, Australia after it saved two children from a highly-venomous Eastern Brown snake.

Animal Emergency Service shared on Facebook that the cat’s owner said his kids were playing in the backyard when the snake slithered up near to them. Arthur was keeping a watchful eye over the babies as they played and noticed the snake slithering up. Instinctually, he pounced on it the snake and started attacking it while the family could bring the children to safety.

The cat killed the snake but was bitten and “in the chaos of getting the children out of the yard, no one saw the actual bite. Arthur collapsed but quickly recovered not long after like nothing was wrong,” Animal Emergency Service wrote on Facebook.

The family figured everything was ok because Arthur continued the rest of his day like nothing was wrong but the very next morning they found him barely moving. The family took Arthur to the veterinarian and, unfortunately, the side effects of the bite were too severe for him to recover and he collected his angel wings right then and there at the Tanawha hospital.

The Eastern Brown snake was collected and a picture of it was also shared by Animal Emergency Service on Facebook. This type of snake is known to be a highly aggressive and has a bad temperament. It is ranked in the top 10 most deadly snakes in the world.