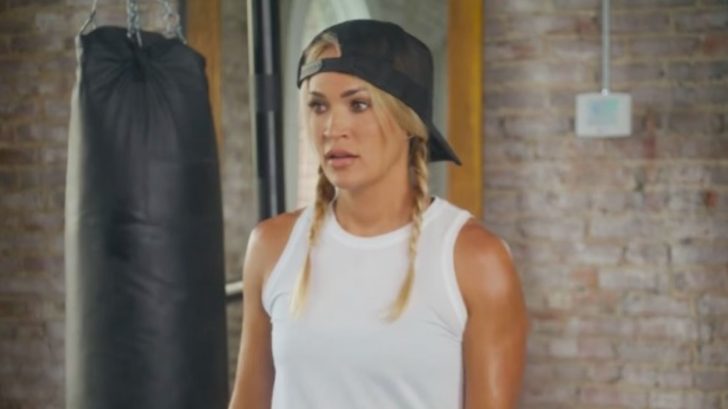 The song has Underwood singing about the end of a relationship. She feels ready to move on, be free, and have fun, but her heart is holding her back. As she sings:

“I want my feel good back. Instead of feeling bad that I can’t get past, the fact that I can’t love nobody else. I would if I could, but I don’t know how. I hate my heart right now...”

Underwood released an accompanying music video for “Hate My Heart” on Wednesday (November 2). The video exclusively premiered on Facebook.

The video shows Underwood and her friends slamming doors as they say “goodbye” to their former partners. As the clip progresses, we see how the women try to work through their heartache. One takes to online shopping, another tries to get back in the dating game, and one dives into their favorite ice cream.

Another woman decides to carve her name into the leather seats of her former lover’s car. Of course, this is a reference to Underwood’s 2006 hit “Before He Cheats.”

As for Underwood, her character is seen letting her frustrations out through exercise. After freaking out the other gym patrons with her over-the-top boxing workout, Underwood texts her friends and asks if they’d like to go out and have some fun.

Everyone agrees, and they turn up at a concert, where another version of Underwood is the performer. The “everyday” Underwood crowd surfs and joins the “rock star” Underwood onstage, and fangirls a bit before singing along to “Hate My Heart.”

As Underwood and her friends walk away at the end of the video, Underwood says, “I could totally be a rock star” before giving a knowing wink to the camera.

Since the video for “Hate My Heart” is exclusive to Facebook at the moment, you have to head here to watch it. Then, you can check out the video below to hear Underwood talk about her experience recording the song.