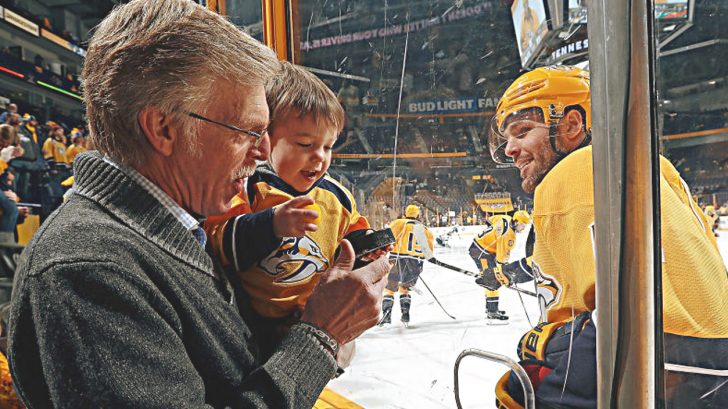 Less than a year after Mike Fisher made the decision to retire from the NHL, he surprised everyone by announcing his return to the sport he loves. Mike rejoined the Nashville Predators, the same team that he played with for years and led to the Stanley Cup Finals as captain in 2017.

Of course, one of the first things people wondered after Mike announced his return to hockey was what his wife, Carrie Underwood, thought of his decision. In a press conference, Mike shared that his choice to come out of retirement had the blessing of his family, including his wife.

A newly surfaced clip from that press conference shows Mike talking even more about what Carrie thought of his return to the NHL. Laughing as he talked, Mike said that Carrie was more than encouraging about his decision:

“But to be honest, Carrie was, she kept asking me almost every day what I was gonna do. She wanted me to do it.”

Of course, Mike knew he needed to consult their now three-year-old son Isaiah to see what he thought about his return to the Predators. In true toddler fashion, Isaiah’s response to his father’s question was absolutely priceless.

So clearly there was a bit of division in the Fisher household. Carrie obviously wanted Mike to get back in the game, while Isaiah didn’t want his dad to leave home!

There’s no telling yet whether little Isaiah will one day follow in his father’s footsteps and become a hockey player himself. He does look awfully cute in a little hockey jersey, as you can see in a photo included in Carrie’s video for “What I Never Knew I Always Wanted.”

Even though Isaiah didn’t seem to be in complete support of his dad’s return to the ice, we hope to see him watching along with Carrie in Bridgestone Arena some time!