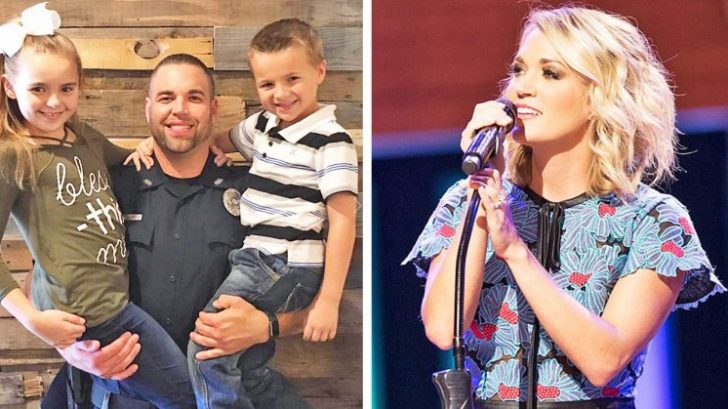 On February 11, Justin Durrett, the Assistant Police Chief of Checotah, Oklahoma, was on his way to work when he was involved in a horrific accident. According to a GoFundMe page established for him, Durrett slid off the road and rolled his truck. He was eventually ejected from the truck, which ended up landing on him.

Sheriff Misty Johnson found Durrett 45 minutes after the accident occurred. While he was still trapped under the truck, Johnson remained with him until help arrived.

Durrett was critically injured in the crash, and suffered a broken neck, a bruised spine, and multiple cuts on his head. According to those behind his GoFundMe page, Durrett is unable to feel anything from the chest down, and has completely lost feeling in his legs.

The GoFundMe account was established to help Durrett and his family pay for medical bills and any future rehab costs. He is the father of two children, and any donations would be of great help to them as well. “This man would give the shirt off his back for anyone and I just want to ask for help on his behalf and children,” reads the GoFundMe.

Since the GoFundMe account was set up on February 12, it has raised $13,000, bringing it close to its $20,000 goal. One hefty donation was a tremendous help to the fund, and it came from a beloved country superstar.

For those of you who didn’t already know, Carrie Underwood grew up in Checotah, and still has close ties there. Her charitable organization, C.A.T.S., was established by Underwood “to improve Checotah, Oklahoma by assisting with causes, fulfilling needs, and providing services to the community and surrounding area.”

Now, Underwood has offered more help to her community through a donation to Durrett’s GoFundMe account. According to his family, who spoke with KOMO News, Underwood and Durrett actually know each other. The two of them were childhood friends, and grew up in the same church.

On Saturday (February 17), Underwood made a donation to Durrett’s GoFundMe account under her married name, Carrie Fisher. The donation totaled $10,000.

Thanks to the generosity of Underwood and others who have donated to Durrett’s fundraiser, he is close to reaching his goal. If you’d like to provide some assistance to him and his family, you can visit his GoFundMe page by clicking here.