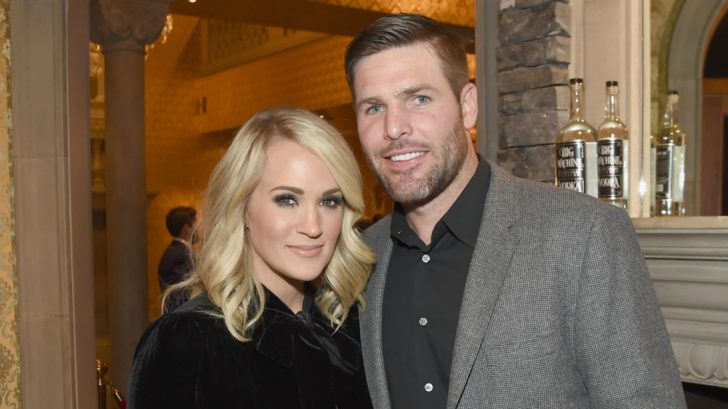 Carrie Underwood has been tight-lipped about the due date of her second child with husband Mike Fisher. But, thanks to a fellow country singer, the news has slipped out.

Underwood will be hitting the road in May 2019 for her Cry Pretty Tour 360, and has made it clear that her first-born, Isaiah, and the new baby will be in tow. According to Taylor Dye, half of the country duo Maddie & Tae, baby Fisher will be roughly four months old when the tour kicks off. Dye let Underwood’s due date slip during an interview with Us Weekly at the 2018 CMA Awards on November 14.

Carrie Underwood co-hosted the CMA Awards for the 11th consecutive year alongside Brad Paisley. The duo used their opening monologue to reveal that Fisher baby #2 will be another boy.

“Seriously, Carrie, gimme a little baby hint,” Paisley said to his co-host before listing off some famous country duos. “Johnny or June? Keith or Nicole? Garth or Trisha? Tim or Faith?”

“No! I am hormonal, I will hurt you,” Carrie responded.

“Waylon or Willie?” Paisley asked before a faux-frustrated Carrie replied, “That doesn’t even make sense! Oh my god! Willie! It’s a Willie!”

IT'S A BOY! Hosts @carrieunderwood and @BradPaisley open up the 2018 @CountryMusic awards with a baby gender reveal! Congrats Carrie! #CMAawards #BradBlewIt #GaryBlewIt pic.twitter.com/zJ2EWSA98c

Underwood revealed the sex of her first child in a similar way in 2014 when she was expecting Isaiah. The banter between Paisley and Underwood was so well rehearsed in 2014 that fans thought Brad accidentally gave away a well-kept secret. But, in a post-awards show interview, the singer confirmed that the announcement was planned even though Carrie didn’t tell him until just before they opened the show.

“Somehow it came up, it was like, ‘We could reveal it on the show, if you’re gonna reveal it anyway,'” Paisley says. “And she said OK.”

Paisley asked Underwood her to not tell anyone (not even him) until the night of the CMA Awards.

“So, we were standing in our places. They were about to say, ‘Please welcome your hosts,’ and [she] looks at me and goes, ‘Come here,’ and she goes, ‘It’s a boy!’” Paisley recalls.

We can’t wait to meet baby Fisher in January! How about you?