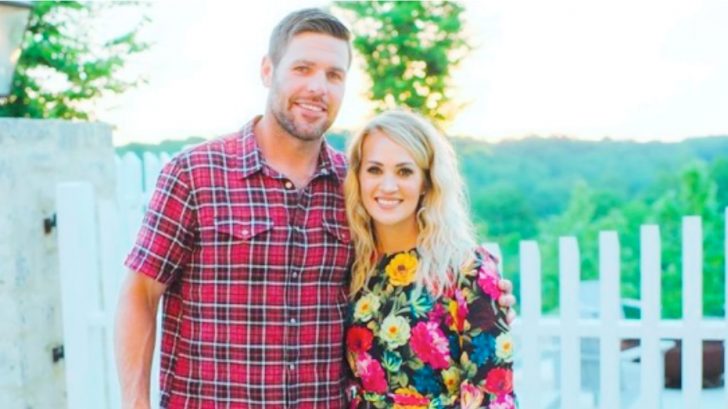 On July 10, 2010, Carrie Underwood and Mike Fisher were married in Greensboro, Georgia in front of over 250 guests. In the ten years that have passed since they tied the knot, Mike has retired from the NHL and the couple has welcomed two sons, Isaiah (age five) and Jacob (age one).

Carrie and Mike celebrated their 10th anniversary with some sweet posts on social media. Carrie was the first to recognize their special day, and gave her post a humorous spin.

The “Drinking Alone” singer posted a slideshow which contained two old photos of her and Mike as children. Referring to those throwback pictures, Carrie wrote:

“Hey you two crazy kids. Believe it or not, some day you both will become (slightly) less awkward, you’ll grow up to have pretty cool jobs, you’ll meet backstage at some girl’s concert, fall in love, get married, have two amazing boys, and live happily ever after!“

The second slide in Carrie’s slideshow is a more recent picture, and shows her and Mike all dressed up as they hold each other close:

“These past 10 years have been pretty incredible with you, @mfisher1212 !” Carrie wrote at the conclusion of her message. “Here’s to many many more…without the bowl cuts! I love you and I thank the good Lord that He brought those two kids together! HAPPY ANNIVERSARY!!!!!!!!!!“

Mike also recognized his anniversary on Instagram. He posted a picture of him and Carrie riding horses, and wrote, “The only way to celebrate 10 years is on a horse.”

He then shared a sweet message for his wife of ten years:

“Its [sic] been the best 10 years of my life and look forward to many more by your side! One of the greatest blessings from God is marriage!!”

You can read Mike’s full anniversary post for Carrie below.

The only way to celebrate 10 years is on a horse:) Its been the best 10 years of my life and look forward to many more by your side! One of the greatest blessings from God is marriage!! It’s not always easy and it’s definitely taught me a lot about myself, my faults and the things I need to work on but man it’s been fun, and rewarding and keeps getting better. Love you @carrieunderwood #happyanniversary

Mike and Carrie’s faith is extremely important to them, and has helped them through some trying times in their lives and relationship.

Recently, the couple spoke about how their faith has influenced their marriage in the four-part miniseries Mike and Carrie: God & Country. Watch the trailer for that series below.

May Mike and Carrie enjoy many more years of love and happiness together!