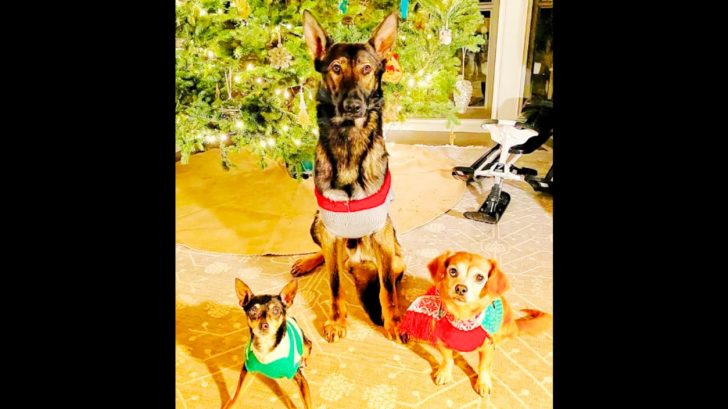 Last Christmas, Carrie Underwood was in the final stretch of her second pregnancy. A little less than a month later, she and her husband, Mike Fisher, welcomed their second son, Jacob.

The baby boy joined his big brother, Isaiah, who turned four in February.

But baby Jacob wasn’t the only new addition to the Fisher family this year!

Just days before Jacob was born on January 21, Mike and Carrie introduced a new furry family member. The couple welcomed a German Shepherd puppy into their home, and Isaiah decided his name would be “Zero.”

“I guess it fits because it’s the chance of surviving if you try to break into our home,” an amused Mike wrote next to a photo of Zero he shared on Instagram.

Meet the newest member of our family! Isaiah affectionately named him Zero. I guess it fits because it’s the chance of surviving if you try to break into our home ? #GSD

Then in March, the Fishers added another member to their brood when they brought home a horse named Bojangles. The family welcomed a second horse soon after.

Carrie and Mike celebrated their anniversary this year by going horseback riding and taking “#TooManySelfies.”

Spent my morning with my cowboy and our horses! ?+?=? #TooManySelfies

So when it came time for Carrie to wish her fans a Merry Christmas this year, it only made sense that one of her new family members was featured in the photo. But since Carrie and Mike are selective when it comes to sharing photos of their kids, the snapshot doesn’t show 11-month-old Jacob.

It also doesn’t show either of the couple’s two horses. Rather, the picture Carrie posted shows a now grown-up Zero along with the family’s other two dogs, Ace and Penny.

All three pups donned festive Christmas sweaters for the occasion, and were looking cute as could be. “Merry Christmas from Ace, Zero and Penny!” Carrie wrote to accompany the picture.

Isn’t it wild to see how much Zero has grown since he joined Mike and Carrie’s family in January?

Carrie loves her dogs, and even recorded a song that surely reminded her of her oldest pup, Ace. The tune, called “The More Boys I Meet,” has Carrie declaring how she loves her dog even more after encountering some duds while dating.

You can enjoy listening to “The More Boys I Meet” in the clip below.

We hope Carrie and her family had a wonderful Christmas this year!