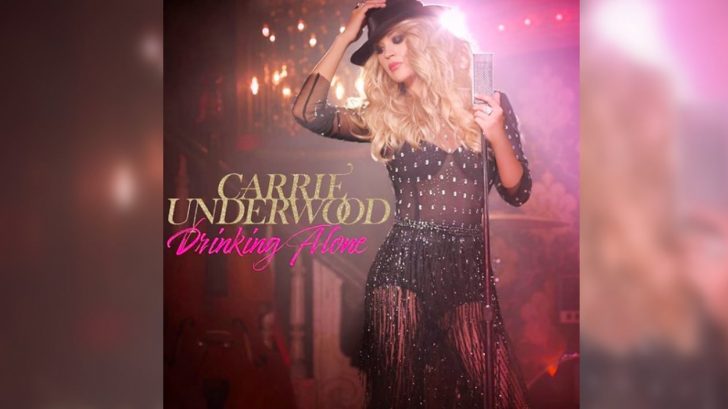 Carrie Underwood‘s prior release off of her album Cry Pretty was the summertime single, “Southbound.” The track hit country radio in April 2019, and went on to become one of the hottest country songs of the summer.

“Southbound” peaked at the third spot on the U.S. Country Airplay chart and also claimed the 64th position on the all-genre Billboard Hot 100.

Prior to the fun-loving “Southbound,” Underwood released the more emotional “Cry Pretty” and the inspirational “Love Wins” as singles. Now, Underwood as a fourth single to share off of her Cry Pretty album, and it’s a steamy, sizzling love song.

Titled “Drinking Alone,” the track was written by Underwood, David Garcia, and Brett James. The song has Underwood embodying the role of a heartbroken woman who spots a seemingly sad man at a bar.

Realizing they both are experiencing heartache, Underwood sings to the man, saying, “Tonight all I need is a stranger, Lips with a whiskey chaser, And a corner booth kiss to make me forget that he’s gone.”

The sultry song is included in Underwood’s Cry Pretty Tour setlist, and has been well-received.

Fans got the first hint that “Drinking Alone” would be Underwood’s next single when she revealed that she would be performing the track at the CMA Awards on November 13. She revealed the news in a post on Instagram, in which she expressed her excitement about her CMA Awards performance. She included the hashtag #DrinkingAlone at the end of the post.

Underwood officially confirmed that “Drinking Alone” is her new single with a post to her social media pages on Monday (October 28). The announcement was accompanied by a photo, which shows Underwood in a see-through bodysuit with sparkles and fringe on the legs.

She accented her look with a fedora-like hat, which she wears whenever she sings “Drinking Alone” on tour.

We wonder if this image is a tease for the type of outfit that Underwood will wear when she sings “Drinking Alone” at the CMA Awards in a couple of weeks? Guess we’ll just have to wait and see!

In the meantime, enjoy the official audio clip for “Drinking Alone” below. Let us know what you think of it when you finish.