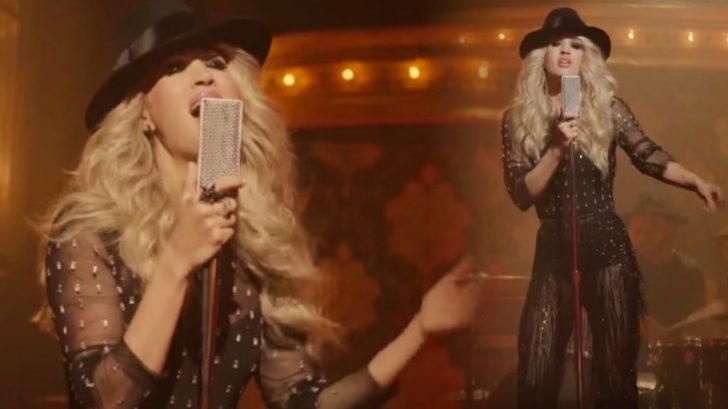 In October 2019, Carrie Underwood announced that her next single would be “Drinking Alone.” The bluesy track is her fourth single off of her acclaimed Cry Pretty album, with her previous releases being “Cry Pretty,” “Love Wins” and “Southbound.”

Underwood named “Drinking Alone” as her next single alongside a social media post that featured cover art for the song. The picture shows Underwood wearing a fedora hat and a jumpsuit with see-through fabric on the legs.

The song was a staple part of her setlist on her Cry Pretty Tour 360, which just concluded on October 31, 2019. But those who didn’t catch Underwood on tour this year got the chance to hear the song during the CMA Awards on November 13, 2019.

Underwood delivered a red-hot performance of “Drinking Alone” during her solo performance slot, and impressed the millions of people watching at home.

A week to the day after her CMA Awards performance, Underwood debuted the official music video for “Drinking Alone.” She had been teasing the video’s release on Instagram for days, and fans finally got the chance to see it when it dropped on November 20, 2019.

The video has Underwood taking on the role of a cabaret singer who croons to the well-dressed patrons sipping away on their drinks. She is seen wearing the same sheer outfit from the “Drinking Alone” cover art, which sparkles under the dim cabaret lights.

She serenades a lonely stranger at a corner booth in the bar, who seems enchanted by her performance. This seems fitting considering the context of the song, which is all about two brokenhearted people drowning their sorrows together.

“Tonight all I need is a stranger, Lips with a whiskey chaser, And a corner booth kiss to make me forget that he’s gone.”

Later on in the video, Underwood is seen in flashback-like scenes with the same man, and it is implied they were once in love. So their broken hearts actually seem to be caused by one another.

Overall, the video for “Drinking Alone” is just as sultry as we expected based on Underwood’s past performances of the song.

You can catch the music video below. We guarantee you’ll want to watch it more than once, it’s that good!