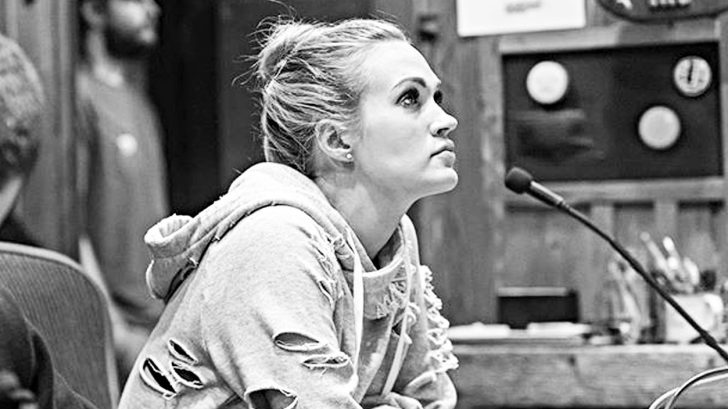 After already performing the national anthem twice during the Stanley Cup playoffs, country music superstar Carrie Underwood has been turned down for another.

Underwood, whose husband has been a long-standing member of the Nashville Predators, performed “The Star-Spangled Banner” during the playoffs last year, and again this year – just several weeks ago.

During a Game Six of the playoffs this year, her husband, Mike Fisher, sustained an unexpected lower-body injury that forced him to undergo surgery and kept him from playing in the following game. The Nashville Predators lost that game and, subsequently, exited the playoffs.

Mike Fisher (lower body) will not play tonight and is day-to-day. #StandWithUs

It ended sooner than anyone would have wished. #StandWithUs | #WPGvsNSHhttps://t.co/L5Ju352xIa

Following the team’s loss, Underwood declared herself a newfound Las Vegas Golden Knights fan, saying that she would be rooting for their team, now.

Welp, to me & our 3 year-old, @mikefisher1212 is the greatest hockey player alive & the @PredsNHL are now & forever the greatest hockey team in NHL history! ? Not the ending we wanted, but we’re alive & well & I get my hubby back, so I say God is good!

And I’ll also say, until next season, I am officially a @GoldenKnights fan! I’ll enjoy seeing them make a little history!!

Beyond just declaring herself a new fan of the Golden Knights, Underwood also threw out an offer that stunned a lot of people!

“And one last thing,” she tweeted. “If the Golden Knights need an anthem singer, I’m 2-0 in the playoffs…just saying…”

And one last thing…if the @GoldenKnights need an anthem singer, I’m 2-0 in the playoffs…just saying…?‍♀️

Goodnight everybody! Lots of ❤️ from #SMASHVILLE

While she herself was all about belting the national anthem once more, it seems the Golden Knights had a very different idea. According to the Las Vegas Review-Journal, officials for the team expressed their gratitude for her offer – but declined anyway.

“We are very flattered by the offer but we do not plan on making any changes to our previously scheduled anthem singer lineup at this time,” officials said in a statement. “This lineup includes musicians who have previously performed at our home games as well as additional entertainers with residencies or ties to Las Vegas that we have been in touch with throughout the year.”

Watch Carrie Underwood’s performance of the national anthem below and let us know what you think about the Golden Knights’ choice in the comments.