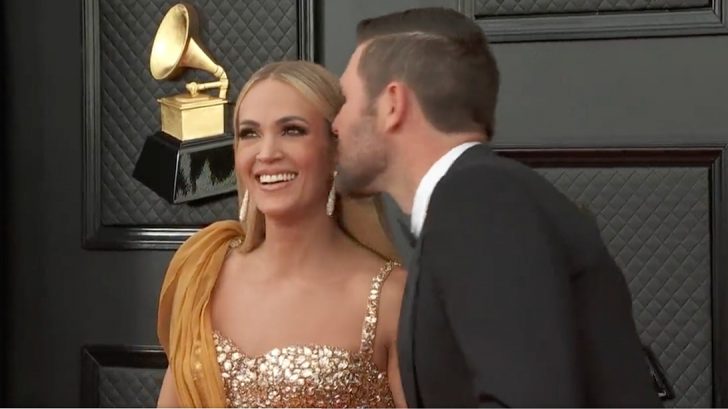 Music’s most exciting night is underway in Las Vegas, and the only thing bigger than the stars on hand at the Grammy Awards could be Carrie Underwood’s stunning gold gown.

Underwood, whose album My Savior took home the award for Best Roots Gospel Album, was a sight to behold as she walked the red carpet alongside her husband, Mike Fisher. The American Idol champ was donning gold from head to toe in a Dolce and Gabbana ballgown. Her husband looked just as sharp in a classic black and white Dolce and Gabbana tuxedo.

Underwood was on-hand at Sunday’s award ceremony not only as a nominee but as a performer. The 39-year-old is scheduled to take the stage for the television debut of her new single, “Ghost Story.” Underwood teased the performance in an interview prior to the show, saying:

“I can’t give away much about my performance. It’s just exciting to perform a new song that I love….and just do it in a way that nobody’s seen before, because nobody’s seen it. This is my first performance of this song.”

Carrie Underwood and Mike Fisher are golden at the #Grammys https://t.co/z0L5inAsgi pic.twitter.com/ILDe6Df2MJ