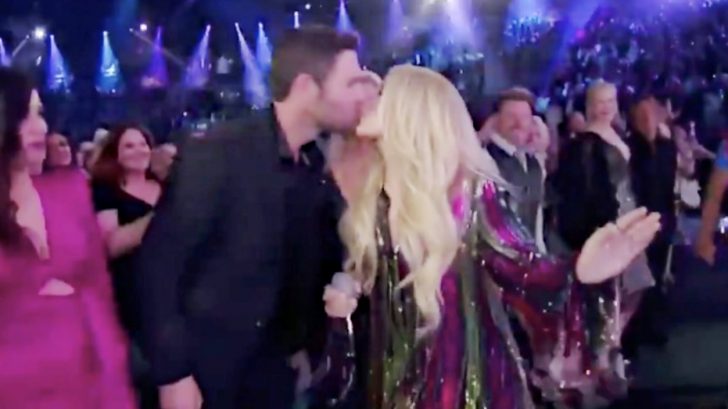 It was her first live performance since having a baby, and Carrie Underwood proved she hdsn’t lost her touch.

She and her husband, retired NHL player Mike Fisher, welcomed their second child, a son named Jacob Bryan Fisher, on January 21, 2019. Underwood announced his arrival on social media with three photos of Fisher, herself, and their older son Isaiah holding little Jacob.

Make sure to swipe through to see all the photos.

Prior to the awards show, Underwood was revealed not only as a solo performer, but she was also announced to be performing alongside Lauren Alaina, Mickey Guyton, Maddie & Tae, and actress Chrissy Metz.

Looking forward to performing with these amazing women and supporting such a great cause! ? #ACMLiftingLives #Repost @acmawards ・・・ We are thrilled to announce @chrissymetz will be making her LIVE television performance debut at the #ACMawards, accompanied by @laurenalaina, @mickeyguyton, @maddieandtae, and @carrieunderwood! Tune in for this must-see collaboration spotlighting #ACMLiftingLives this Sunday, April 7 on @cbstv and @cbsallaccess!

They performed a moving song from the soundtrack of Metz’s movie Breakthrough, whose soundtrack includes music from all these talented ladies.

The day before the ACM Awards, Underwood shared a sneak peek into her performance, which looked like it included a couple back-up dancers. She also revealed that she would be singing her song “Southbound.”

Underwood started her performance at a Las Vegas pool party, donning over-sized sunglasses before bringing it inside the MGM Grand Garden Arena, where the ACM Awards were held.

We’re here for this @carrieunderwood #ACMawards poolside performance. Now if only summer would get here … ? pic.twitter.com/Eok1KhsTAx

She and her crew walked through the crowd, passing Luke Bryan and Keith Urban, and eventually made their way to the stage, but not before she made a super sweet pit-stop at Fisher’s seat in the front row.

She stole a kiss from her husband, which prompted lots of cheers!

Watch the full performance below.