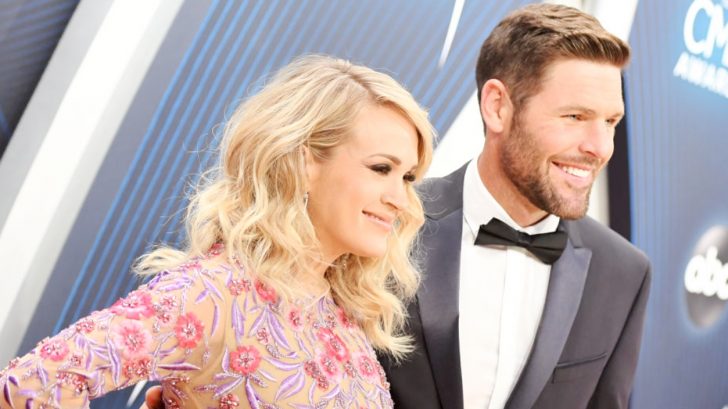 With a new baby on the way, this marked the last year that Carrie Underwood and her husband, Mike Fisher, celebrated the Christmas season as a family of three.

Carrie announced her pregnancy over the summer, and revealed during the CMA Awards in November that she is expecting a baby boy. The new bundle of joy will join big brother Isaiah, who turns four in February.

“[I’m] just so thankful … to find out Isaiah’s gonna have a baby brother,” Carrie told Us Weekly backstage at the CMA Awards. “It was just great news. We’re excited.”

Even Santa’s helper gets a little tired getting ready for Christmas! ?❤️?

While Carrie herself has never confirmed when Baby Fisher should arrive, one of her future tourmates spilled the beans.

While speaking to Us Weekly at the CMA Awards, Taylor Dye of Maddie & Tae said that Carrie is due in January. Maddie & Tae will be touring with Carrie once her Cry Pretty Tour kicks off in the spring, and in addition to opening for her, have also volunteered their child-watching services.

“And we’ve already offered to babysit,” she said.

So with Baby #2 on the way any day now, Carrie and Mike seemed to soak in every second of the Christmas season as they enjoyed the holiday with Isaiah.

Carrie shared her first photo of her son in nearly a month to show how they celebrated Christmas together. It looks like she, Isaiah, and Mike enjoyed a cozy evening together, and Isaiah snuggled up to his mama to sleep, using her baby bump as a pillow.

“I’m thanking the Lord tonight for His Son while I cuddle with mine,” Carrie wrote, sharing that they were watching Christmas movies together to cap off their Christmas Day.

I’m thanking the Lord tonight for His Son while I cuddle with mine. Watching Christmas movies with him while he uses my big belly as a pillow. Sweet ending to another great Christmas. Merry Christmas to all of you, from my family to yours! ?

But as precious as that photo was, nothing can top the cuteness captured in a photo Mike shared to his Instagram on Christmas.

Breaking Out The Christmas Pajamas

In honor of the festive day, the Fisher family went all-out and wore matching Christmas onesies. Carrie, Mike, and Isaiah all matched each other, and even Carrie’s dogs Penny and Ace were sporting their own Christmas pajamas!

The onesie-clad bunch posed for a family photo in front of their Christmas tree. They’re all too cute for words!

Carrie and Mike have always made their fans feel like family by sharing sweet snapshots such as this. A few years back, Carrie helped make her fans feel even more included in her life when she released a series of never-before-seen photos to accompany her song “What I Never Knew I Always Wanted.”

The heartwarming clip features an abundance of photos from Isaiah’s early days, and is such a joy to watch. Be sure to check it out below.

We hope Carrie, Mike, Isaiah, Ace, and Penny all had a lovely Christmas!