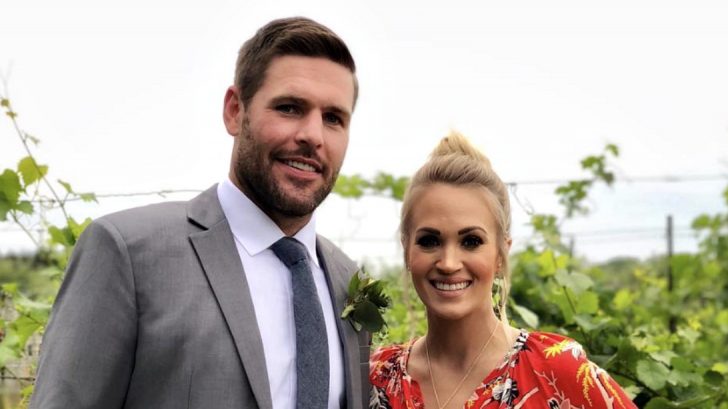 Less than one week after celebrating their 8th wedding anniversary, Carrie Underwood and Mike Fisher were on hand to help some friends celebrate their special day.

In photos posted to Instagram, Carrie was absolutely glowing as she posed beside her handsome hubby as Mike’s long-time friend, Patrick McAuley, wed Allison Shaw. According to the couple’s wedding website, the ceremony took place on Saturday (July 14) at the Waupoos Estates Winery in Picton, Ontario.

Carrie wore her hair in an elegant updo while donning a floor length red floral dress that perfectly complimented her husband’s gray suit.

A second photo shows all of the Fisher siblings (Rob, Meredith, Bud and Mike) and their spouses.

Carrie and Mike appear to be enjoying their time together now that Mike has officially retired from the NHL. Fisher first announced his retirement from the Nashville Predators in 2017 after falling short of winning the Stanley Cup. But, the retirement was short-lived as he came back in an effort to help his team have another shot at the coveted title. His second retirement announcement came after the Preds ended their 2018 just shy of earning the Stanley Cup.

But, the words Fisher penned in his original still hold true. “I’m looking forward to a future that includes a lot more time with my family. Things change when you have kids and you have a family. They’ve supported me without question, and now it’s my turn to return the favor.” That extra time with family has included taking his son to his first Carrie Underwood concert and enjoying some entertaining family road trips, as documented on social media.