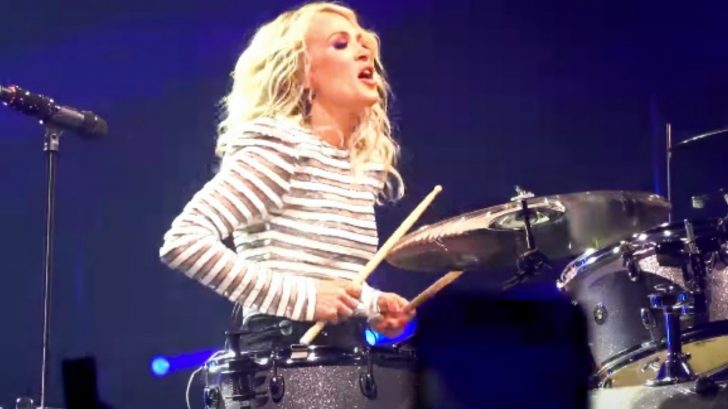 “I woke up this morning with the sounds of the crowd still ringing in my ears! What an amazing opening night for the #DenimAndRhinestones tour! Thanks, Greenville, SC for being what may have been the loudest arena crowd we’ve ever had!“

Underwood is known for her over-the-top tours with various set changes and costumes. The Denim & Rhinestones Tour is no exception. As you can see in the photos above, she has tons of fun stage pieces she utilizes throughout her show.

Underwood also wowed her fans with a drum solo during her concert. The solo came in the middle of one of her new songs, “Poor Everybody Else.”

The audience members cheered and watched in amazement while Underwood jammed out on the drums. She crushed it!

What made Underwood’s drum solo even better was the fact that she was clearly into her performance. She was having a blast, and it showed.

This isn’t the first time we’ve seen Underwood play the drums on stage. She famously played a drum solo when she performed “Church Bells” on tour several years ago.

Now, Underwood has reunited with the drums on her Denim & Rhinestones Tour. Watch her epic new drum solo in “Poor Everybody Else” by tuning in to the fan-filmed video below.