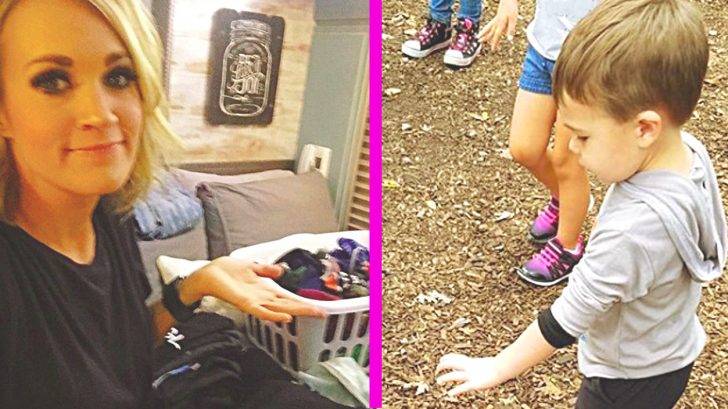 Now three years old, Carrie Underwood and Mike Fisher‘s little boy Isaiah isn’t so little any more. Recent photos and videos shared by the couple not only show how much he’s grown physically, but how much his personality has grown as well.

A set of videos that Carrie shared prior to CMA Fest shows that Isaiah is a true sweetheart. The videos show him standing on a bridge in Nashville, waving and welcoming passerbys to the city.

A video shared by Mike in May shows that Isaiah is also taking interest in his hobbies. Mike is a pretty avid hunter, and even owns his own hunting apparel company, Catchin’ Deers.

So when Isaiah started trying to call turkeys along with him, it was a proud father moment for Mike. Isaiah seemed to have a ton of fun, and jumped with glee when the turkeys responded to his call.

A new photo Carrie just shared on Wednesday (June 13) shows that her little man also has quite the imagination.

Despite the fact that Isaiah could certainly have anything he’d ever want, he’s recently taken interest in a toy that’s surprisingly simple. So simple in fact, that it isn’t a toy at all.

Taking to Instagram, a slightly embarrassed Carrie admitted that for two days (and counting), Isaiah has been playing with nothing but…a potato.

Yes, you read that right. Isaiah has been playing with a potato. But not just any plain potato, it’s a potato with a cute smiley face drawn on it. It also likes to rest in an inflatable doughnut, because why not?

As weird as it may seem to Carrie, it apparently isn’t weird to Isaiah. Wonder how long that potato will keep him entertained? Hopefully Carrie keeps us updated!

If you’re anything like us, we’re sure you’ve enjoyed watching Isaiah grow over the course of the past three years. Take a trip back in time to see some of his earliest photos when you watch Carrie’s special video for her song “What I Never Knew I Always Wanted.”

There’s no denying it, Isaiah has always been a precious little guy.