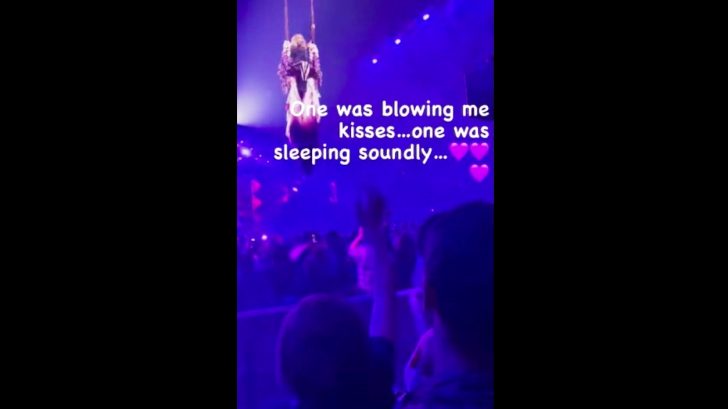 “I woke up this morning with the sounds of the crowd still ringing in my ears!” Underwood said in a post reflecting on the show. “What an amazing opening night for the #DenimAndRhinestones tour! Thanks, Greenville, SC for being what may have been the loudest arena crowd we’ve ever had!”

Underwood’s husband, Mike Fisher, and their two sons, Isaiah (age seven) and Jacob (age three), were in the audience during the concert. Fisher said he and the boys “were in awe” of Underwood’s performances.

Underwood later shared a video showing her two sons watching her sing “Ghost Story” during the concert. Well, at least Isaiah was watching. She shared that Jacob had fallen asleep, but Isaiah was wide awake and excited to see his mom onstage!

Underwood floats over the stage on a giant swing when she sings “Ghost Story” on tour. This mimics her music video for the song. She was swinging directly over her family at one point, which is when Isaiah repeatedly called out “mommy” to her and waved.

As if Isaiah couldn’t be any sweeter, he then started blowing kisses to his mama:

“My sweet boys came to see their mommy’s first show!” Underwood captioned the video. “Jakey caught a few songs, at least, before he drifted off to dream land…”

Additional text on top of the video said, “One was blowing me kisses…one was sleeping soundly…“

You can watch the adorable video Underwood shared below. Her boys are precious!