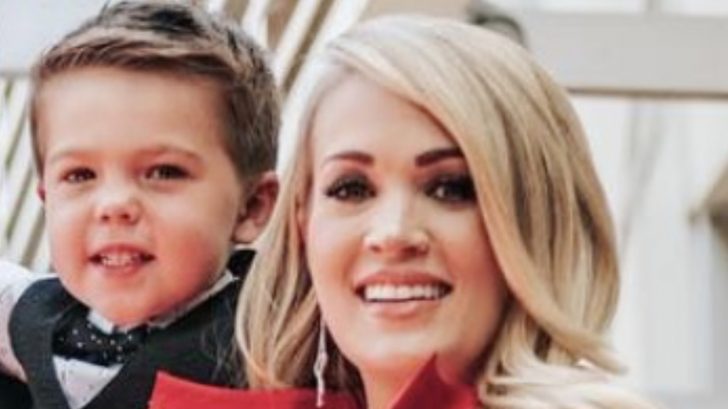 There’s definitely no shortage of laughs in the Fisher household!

Carrie Underwood and her husband Mike Fisher recently welcomed baby number two, and they clearly already have their hands full with four-year-old son Isaiah. Based on just a few social media posts, we can tell what a personality the future big brother has.

During CMA Fest back in June 2018, he took it upon himself to welcome tourists to Nashville by standing on a pedestrian bridge and waving at everyone while saying,”Hi! Welcome to Nashville!” and giving out high fives.

He also has quite the imagination when it comes to toys. At the beginning of Summer 2018, he enjoyed playing with a potato for a few days straight, which gave his mom a kick! During an appearance on The Ellen Show, the talk show host confronted Underwood about the potato toy.

Just a few months after the potato incident, Isaiah made his mom laugh once again – this time with a conversation the two had and she had to share it with her fans.

The “Cry Pretty” singer shared the funny conversation on Twitter, saying she caught Isaiah – who was three at the time – staring at her, so she asked him what he was looking at.

“I’m just looking at you,” to which she asked why, and he said, “I just want to look at you. I haven’t looked at you in months.”

“Not sure if this is sweet or if it’s strange he hasn’t looked at me in months,” the “Love Wins” singer tweeted.

Not sure if this is sweet or if it’s strange that he hasn’t looked at me in months. ?‍♀️

We’re sure Isaiah has looked as his mom within the last month, seeing as Underwood was at his soccer game earlier the same day, watching him score three goals – even though one was for the other team!

Officially a soccer mom this morning! It’s chilly out but I’m staying warm rocking some @caliabycarrie …the kids played a good game! Isaiah scored two goals for his team…and one for the other team ?‍♀️. Hey, a goal’s a goal! ⚽️

This is just proof that kids really do say the darnedest things!

Watch an interview below from April, where Underwood tells another funny story about Isaiah.