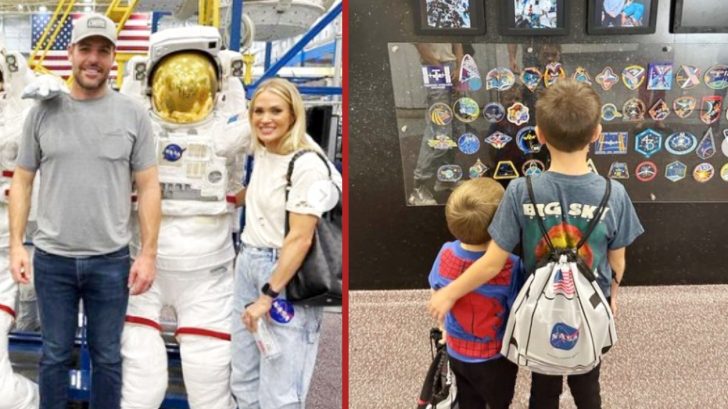 Carrie Underwood‘s Denim & Rhinestones Tour recently took her to Austin and Houston. But she found some time to have a little fun with her family before she hit the stage!

Carrie, her husband Mike Fisher, and their two sons Isaiah and Jacob “had the best day” exploring at the NASA Space Center in Houston. She shared a bunch of photos showcasing her family’s experience at the center.

“Had the best day @nasa talking to astronauts in space, driving moon rovers, checking out space station replicas and meeting some really cool people!” Carrie captioned the snapshots. “Thanks to @astro_kimbrough and everyone there for showing us around and being so sweet to my boys (who may just end up being future astronauts)!!! #Houston #Space #BeamMeUp.”

Mike posted some of the same photos from their outing. It sounds like he also had a fun time touring the Space Center with Carrie and the kids.

“Thank you @astro_kimbrough and @nasa for an incredible tour today!” he said. “Driving the moon rover was pretty cool but being in Mission Control and talking to the astronauts in space was the highlight! @nasajohnson.“

We’re glad Carrie, Mike, Isaiah, and Jacob had such a great time learning about space!

Now Carrie is gearing up for the CMA Awards on November 9. She’ll be part of an ensemble honoring Alan Jackson and will also deliver a solo performance of her latest single, “Hate My Heart.” Watch that song’s brand-new music video below.