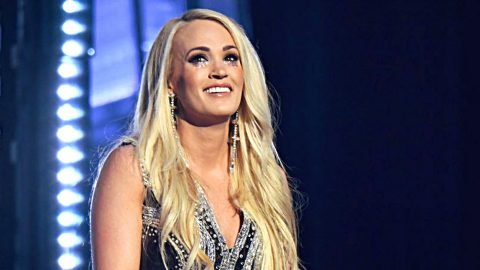 When Carrie Underwood announced that she was expecting her second child, she tied the happy news into a video announcement about her new tour. It was August 2018 when she made that announcement, and her tour wasn’t scheduled to kick off until May 2019.

In her video announcement, Carrie shared that the reason the tour was scheduled so far out was because she was pregnant!

Following the announcement, fans speculated when Carrie’s due date was based on the start date of her tour. People figured Baby Fisher would debut in January or February, and they were right on the money.

Carrie gave birth to a baby boy on January 21. She and her husband Mike Fisher named him Jacob Bryan, and shared a few photos of him after he came into the world.

Jacob Bryan Fisher entered the world in the wee hours of the morning on Monday…his mom, dad and big brother couldn’t…

Recalling how Carrie previously brought her eldest son, Isaiah, with her on tour after he was born, people were curious to know if she’d do the same with Jacob. Before he was born, Carrie told The Tennessean that she planned to bring Jacob and Isaiah along with her on the road, admitting it was going to be a challenge.

“It’s going to be a different ball game, for sure,” she said. “My brain, I’m such a planner. I want to know how it’s all going to go. But no matter who you are, you make it happen, you make it work, you get your team behind you.”

As she was rehearsing for the first date of the tour, Carrie shared videos and photos proving just how awesome her team truly is.

But one of our favorite snapshots from Carrie’s tour rehearsals is actually one of baby Jacob!

The photo is dark, but you can still clearly see Carrie standing and singing on stage. Jacob can be seen watching from the crowd, sporting a huge pair of protective earmuffs that look bigger than his head!

While we look at the photo and think it’s precious, Carrie thinks it’s downright hilarious. “Clearly, my 3 month old is super interested in the inner workings of a #CryPrettyTour360 show!” she wrote, including a sleeping emoji to indicate that Jacob was probably snoozing through the whole rehearsal.

Although this photo only shows part of Jacob’s face, it’s actually pretty significant. After he was born, Carrie went just shy of three months without sharing any photos of him. She finally shared a new picture in mid-April, but it was only of Jacob’s feet.

Carrie and Mike have famously chosen to shield Isaiah from the spotlight, and are selective with the photos they share of him. It seems they are following the same pattern with Jacob.

But, the couple did share some rare photos of Isaiah during Carrie’s Storyteller tour as part of a video montage that accompanied her song “What I Never Knew I Always Wanted.” You can watch that heartwarming video below.

Maybe they’ll decide to do something similar with photos of Jacob one day!