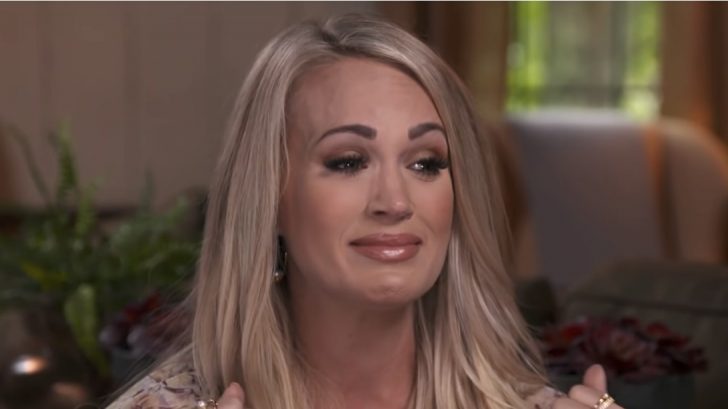 2017 was a devastating year for Carrie Underwood for more reasons than one. While the singer shared the news about the frightening fall that left her with more than 40 stitches in her face just one day after hosting the CMA Awards in November, nobody knew that the fall was just one of the trials that Underwood faced that year.

During an interview with CBS Sunday Morning, Underwood, who is now pregnant with her second child, shared that she suffered three miscarriages prior to her current pregnancy. Two of those miscarriages took place prior to her accident in November and played a huge role in the development of her new album, Cry Pretty.

“It speaks to a lot of things that have happened in this past year,” she explained. When asked to elaborate, she began to choke up and said, “Here we go. Oh, lawdy! 2017 just wasn’t how I imagined it. I’d kind of planned that 2017 was, you know, going to be the year that I work on new music, and I have a baby. We got pregnant early 2017, and didn’t work out.”

“And I got pregnant again in the spring, and it didn’t work out. Got pregnant again, early 2018. Didn’t work out. So, at that point, it was just kind of like, ‘Okay, like, what’s the deal? What is all of this?’” Underwood poured her time into writing new music, and even when she didn’t feel like writing, it helped her work through the feelings of loss.

“And throughout the whole process, you know, I’m writing and, like, literally right after finding out that I would lose a baby, I’d have a writing session, I’d be like, ‘Let’s go. You know, I can’t just sit around thinking about this. Like, I wanna work, I wanna do this,'” she shares. “Cause I would literally have these horrible things going on in my life, and then have to go smile and, like, do some interviews or, like, do a photo shoot or something, you know? So it was just kind of, like, therapeutic, I guess.”

At one point during her current pregnancy, the “Jesus, Take the Wheel” singer was convinced that she had suffered another miscarriage and was heartbroken.

“Mike was away just for the evening, and I texted him, and I was like, ‘I don’t really want to be alone, so I’m just gonna go snuggle with Isaiah,'” she says. “And I don’t know how I didn’t wake him up, but I was just sobbing. And I was like, ‘Why on Earth do I keep getting pregnant if I can’t have a kid? Like, what is this? Shut the door. Like, do something. Either shut the door or let me have a kid.'”

“And for the first time, I feel like I actually I told God how I felt,” she says. “And I feel, like, we’re supposed to do that. That was like a Saturday – and the Monday I went to the doctor to, like, confirm, another miscarriage. And they told me everything was great! And I was like, ‘You heard me.’ Not that He hasn’t in the past. But maybe, I don’t know, He heard me.”

Carrie Underwood will hit the road for her Cry Pretty Tour in May with her son, Isaiah, and the new baby in tow. Click here to see if Carrie will be coming to your city.

Watch Carrie Underwood’s full interview with CBS Sunday Morning in the clip below.