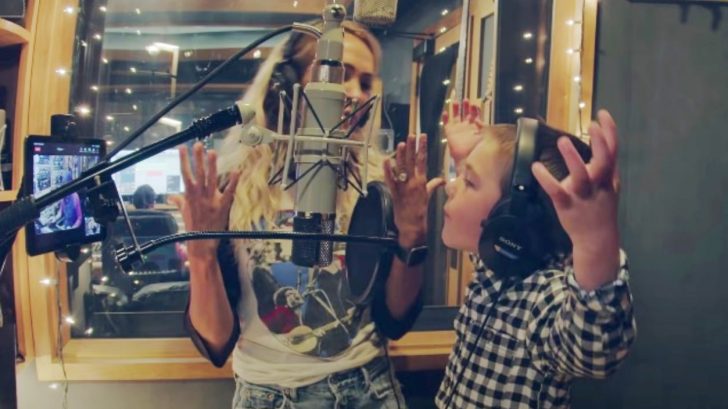 Carrie Underwood‘s first full-length Christmas album, My Gift, was released on September 25. As Carrie explained in a video, the album’s title was inspired by the beloved song “The Little Drummer Boy.”

“…the sentiment behind it is just so honest,” Carrie said of the song. “There’s a little boy…they’re bringing gifts to baby Jesus. He doesn’t have anything, he’s poor, so he says, ‘I know, I’m gonna play my drum for him. That’s what I have.’ And to me, that’s a gift that was given to him by God, his love of music.“

With “The Little Drummer Boy” in mind, Carrie named her Christmas album My Gift because she too, loves music, and considers her voice to be her own gift she wants to “give…back to Jesus.”

As Carrie explained, “The Little Drummer Boy” also makes her think of her eldest son, five-year-old Isaiah. Because of this, she had him come in to the studio to record the song with her:

“I was in the booth with him, and trying to get him to access all his little 5-year-old emotions, which he can totally do on his own,” Carrie said during an appearance on TODAY.

Carrie also noted that Isaiah was an “expressive” singer. After she heard him singing with her on their recording of “The Little Drummer Boy,” she experienced a whole wave of emotions.

“When I heard the song back, with his sweet little voice on it, I was laughing and crying and just so many emotions,” she said.

You too, are sure to get a bit emotional when you hear Carrie sing “The Little Drummer Boy” with her son. Listen to the audio clip of their duet below.